"Batman is all of us... he is our rage at injustice... he stands alone, as we all wish we could, in the face of a corrupt system which wishes to oppress and exploit... he is that broken child, searching the dark alleys of the human soul to bring balance to the world."
―Zack Snyder[[[1]|[src]]]

Snyder stepped away from the post-production of Justice League following the death of his daughter, and Joss Whedon handled re-shoots that reshaped the film. He then worked on the project Zack Snyder's Justice League, an alternate vision for the film Justice League based upon original unused footage he had shot for the film which was combined with new footage. The project launched in 2021 for the streaming service HBO Max. He is also a producer for the film The Suicide Squad (2021).

Snyder has also made four known cameo appearances in the DCEU: he voiced the man who says, "Yeah, we got it," in the Knightmare sequence of Batman v Superman: Dawn of Justice, Bruce Wayne's hand when cloning Anatoli Knyazev's phone in the same movie, and he appeared as a World War I British soldier holding a Lewis gun in Wonder Woman. He also appeared as a Fred & Ginger Coffee patron in Zack Snyder's Justice League, representing his time storyboarding in coffee shops. Snyder has also directed the 2013 Superman 75th Anniversary Animated Short to mark the 75 years of Superman and to release with Man Of Steel.

Snyder also wrote the introduction for the book Man of Steel: Inside the Legendary World of Superman as well as the afterword for Batman v Superman: Dawn of Justice: The Art of the Film.

Henry Cavill, Zack Snyder and Kevin Costner on the set of Man of Steel.

Zack Snyder and Henry Cavill on the set of Man of Steel. 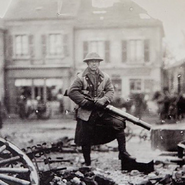