A motion comic version was later released through DC FanDome 2021.

As part of an after school detention program, Jazz, Teo, and a third friend were required to attend a tour of the Smithsonian National Museum of Natural History. The tour was led by Diana Prince, but was cut short by a power outage that was used as cover for armed robbers to steal the valuable Noble Diamond. Diana disappeared, but when Wonder Woman arrived to stop the robbers, the trio of students joined in to help her take down the thieves. 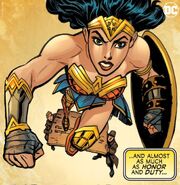 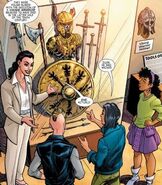 Unused cover for the comic.

Walmart-exclusive 4-pack with 3 unrelated comics and a mini poster.