View source
watch 02:07
Spider-Man: No Way Home Trailer Dropped - The Loop
Do you like this video?
Play Sound
__

A digital soundtrack, titled Wonder Woman 1984 (Sketches from the Soundtrack), was released on February 5, 2021, featuring drafts of songs on the soundtrack.

While it is not officially on the track list Beautiful Lie reappears in one of the scenes. 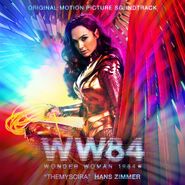