"Nothing good is born from lies. And greatness is not what you think."
―Wonder Woman[src]

Wonder Woman 1984 is an upcoming 2020 superhero film, based on the DC Comics superheroine of the same name.[2] It will be the ninth film in the DC Extended Universe. It was originally scheduled for release on June 5, 2020[5]; however, due to the COVID-19 pandemic, it was delayed to August 14, 2020.[4] It will mark the first time in the DCEU that any character has received a second solo film.

In 1984, Diana Prince struggles against two powerful adversaries - Maxwell Lord and the Cheetah - whose ruthless ambitions threaten to destroy the world that she has sworn to protect.

Production began on June 13, 2018, with Warner Bros. releasing a press release, with filming to take place in the US, UK, and Spain.[2] It has finished filming. This was announced on Instagram by Gal Gadot.

In October 2018, the film's release date was pushed back for a second time. It was scheduled to hit theaters on June 5, 2020. On March 24, 2020, Warner Bros. pushed back the release of Wonder Woman 1984 two months due to the ongoing COVID-19 pandemic. The sequel, which was set to bow in theaters in North America on June 5, will now hit the big screen on August 14.[4]

Pre-production officially began in the United Kingdom by early December 2017.[19] That same month, director Patty Jenkins stated that the film will be another great love story with a new love interest being cast.[20] In April 2018, the film was confirmed to be set in the 1980s.[21] The next month, French production designer Aline Bonetto (Amélie, Wonder Woman) was announced to be returning for the sequel, as well as Academy Award winner Lindy Hemming, also returning as costume designer.[22]

In September 2017, Gal Gadot was confirmed to return as the title character.[23] On February 28, 2018, it was reported that Kristen Wiig was in talks with the studio to play Cheetah, the main villain of the film,[24] with director Patty Jenkins confirming her casting the next month.[25] By March 28, Pedro Pascal, who played Ed Indelicato in the pilot of the canceled 2011 Wonder Woman television adaptation, was cast in an undisclosed key role, which was later confirmed to be Maxwell Lord[8][9] On June 13, director Patty Jenkins confirmed the addition of Chris Pine as Steve Trevor through Twitter.[26] On July 24, 2018, Natasha Rothwell was announced to be cast in an undisclosed role.[27] A few days later, on July 27, Ravi Patel and Gabriella Wilde also joined the film, with their being roles kept under wraps as well.[28] By late August, Connie Nielsen and Robin Wright were confirmed to reprise their roles as Hippolyta and Antiope in a flashback sequence.[29] In November 2018, Kristoffer Polaha revealed that he has a role in the film.[15] On August 19, 2019, a set photo of Rosanna Walls revealed that she had a role in the film.[16], On November 16, 2019, Amr Waked had announced on his Twitter account that he will be in the film.[17][30] On February 29, 2019, Gwendolyn Osborne revealed in an interview that she had a role in the film.[18]

Principal photography began in Georgetown on June 13, 2018, under the working title Magic Hour.[31][32][33] Filming took place at the Warner Bros. Studios, Leavesden in the United Kingdom, and at a number of locations around the District of Columbia and Northern Virginia in the United States, including the Landmark Mall in Alexandria, Virginia during June and July 2018,[34][35][36] with scenes shot in Alexandria from June 18 through July 14.[37] Filming occurred outside the U.S. Capitol in Washington D.C. during mid-June.[38] Other filming locations around DC included the Penn Quarter neighborhood, McPherson Square, the DAR Constitution Hall near the White House, the Museum of Natural History (Smithsonian), and the Lincoln Memorial.[39][40][41] By mid-July, production in the United States was completed and moved to the United Kingdom.[42] In August, filming on location took place in several places around London, including St. Andrew's Place, Regent's Park and the Royal College of Physicians.[43][44] Between September and October 2018, the production also took place at Almería, in Andalucía, southern Spain,[45][46] as well as Fuerteventura and Tenerife in the Canary Islands.[47][48] From September 5 to September 11, filming occurred at the fortified complex The Alcazaba of Almería and the Wall of Jayran in Almeria.[49] Production moved to Fuerteventura from September 13 through September 26, with the Corralejo Dunes National Park, Parque Holandés, El Jablito, La Oliva and The Jandía Natural Park as filming locations.[50][51] Filming in Tenerife began during the last week of September, shooting around different locations of the island for 2 weeks.[52][53] Production went back to the UK in October, with shooting on location taking place at the Imperial War Museum Duxford|Imperial War Museum in Duxford, and Hyde Park and the Savoy Hotel in Central London.[54] By the end of the month, filming occurred at Torrington Square, adjacent to Birkbeck, University of London.[55] By mid-November 2018, Pedro Pascal finished filming his part.[56] Principal photography wrapped on December 22, 2018, after a six-month shoot.[57][58]

Richard Pearson will serve as the editor for Wonder Woman 1984.[31] John Moffatt (Life and the Harry Potter franchise) will serve as the overall visual effects supervisor for the film.[59] DNEG will provide the visual effects for the film.[60] On October 21, 2019, director Patty Jenkins tweeted that the first trailer for Wonder Woman 1984 would premiere at CCXP in Brazil on December 9, 2019.[61] 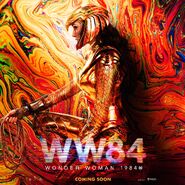 Retrieved from "https://dcextendeduniverse.fandom.com/wiki/Wonder_Woman_1984?oldid=126148"
Community content is available under CC-BY-SA unless otherwise noted.