This was the first Amazonian shield used by Diana Prince/Wonder Woman after taking it from the armory in Themyscira to use on her journey into the world of Man. The shield was used as an alternative to the Bracelets of Submission as a defensive weapon, protecting Diana from both ranged and melee attacks.

In 1918, Diana took the shield from the armory in Themyscira, where it was held alongside the God Killer, Lasso of Hestia, and her signature armor. Since it was held in the armory, it is likely the shield held some significance.

Diana would go on to use this shield when fighting alongside the Wonder Men in World War I at the Battle of Veld, showing the full defensive capabilities of the shield at No Man's Land.[1]

Sometime between 1918 and 1984, Diana stopped using this shield, although it is unclear why. She would later acquire a second shield by 2015.

Much like the Bracelets of Submission, Diana's shields are virtually indestructible. Her first shield was able to withstand machine gun fire and deflect shells from the Imperial German Army.[1]

The shield being used offensively

The shield being used offensively 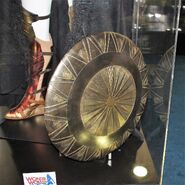