The armor consists of a red leather bodice, topped by a golden eagle, connected to a blue leather skirt, seemingly held together by a golden belt that resembles a 'W'. In addition to this main piece, the armor also seems to have a set of matching boots, consisting of adjustable greaves, as well as a matching armband which resembles the shape of the 'W' belt.

While wearing it, Diana also usually uses two other important pieces of Amazonian battle gear - her Bracelets of Submission and the Lasso of Hestia - as well as various Amazonian or Ancient Greek swords and shields, such as the God Killer. In addition to these, she also dons the tiara of her late aunt, Antiope.

Prior to Diana's departure to Man's World, the armor was held in the armory on Themyscira, alongside other Amazonian treasures such as the "God Killer" sword and the Lasso of Hestia, suggesting its importance.[1]

Diana first donned the armor right before leaving Themyscira with Steve Trevor to stop World War I. While initially breaking into the armory to retrieve the God Killer and Lasso of Hestia, she noticed the set of armor and took it for her journey as well. Diana wore the armor throughout her first venture into Man's World, and ultimately during her final confrontation with Ares.[1]

Since her entrance into Man's World, Diana has used the armor continuously throughout her heroics, including during the fight against Doomsday in Metropolis with Superman and Batman, and the second half of the Battle for Earth.[2][3] 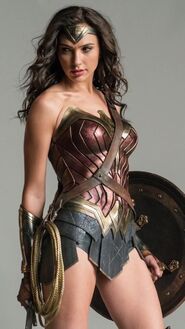 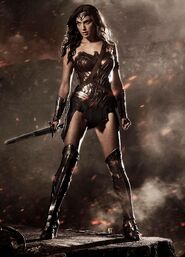 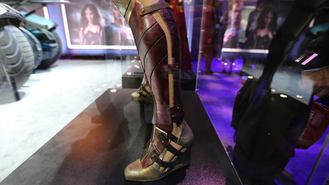 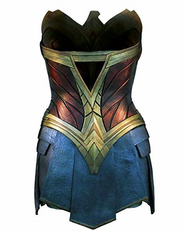 Armor from behind
Add a photo to this gallery

Retrieved from "https://dcextendeduniverse.fandom.com/wiki/Wonder_Woman%27s_armor?oldid=107944"
Community content is available under CC-BY-SA unless otherwise noted.