"You know I paid millions for this building's security system."
―Bruce Wayne tells Diana Prince about the cost of the hangar.[src]

Wayne Aerospace Hangar is an abandoned submarine hangar on the docks of Gotham Harbor in Gotham City, New Jersey. [1] It served as a central development location for Wayne Aerospace, before it was left behind. The Flying Fox is based here.

The Wayne Aerospace Hangar had been closed for years, before Bruce Wayne reopened it and began to fix up the vehicle nicknamed the "Flying Fox", as a way to transport the newly-formed Justice League from place to place. 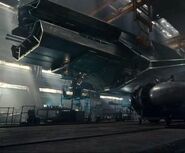 The Flying Fox under construction at the hangar.
Add a photo to this gallery

Retrieved from "https://dcextendeduniverse.fandom.com/wiki/Wayne_Aerospace_Hangar?oldid=90302"
Community content is available under CC-BY-SA unless otherwise noted.