Wallace Vernon "Wally" Keefe was a former employee of Wayne Enterprises. He worked at the Wayne Financial Building in Metropolis, but during the Black Zero Event, he suffered injuries that cost him his legs.

"I can't feel my legs!"
―Wallace Keefe to Bruce Wayne[src]

During General Zod's invasion of Earth, his forces attacked Wallace Keefe's home city of Metropolis.[1] During his attempt to terrarform, the Wayne Financial Building where Keefe worked in collapsed. Present at the time, Keefe attempted to evacuate people from the building before it began to crumble.

Bruce Wayne, just arriving in the city, got to the ruins of his building. He entered the rubble looking amongst it for any survivors. There, he found Keefe, his legs trapped underneath rubble, before joining a few others at freeing him. Keefe was rushed in to get medical care, though the lower halves of both legs had to be amputated, resulting in him losing his job.[2]

Life as an Amputee

Shortly after the amputation, his wife left him, having been devastated by the death of their daughter during that incident. Despite losing his job, Wallace was supposed to be compensated with monthly checks. Lex Luthor intercepted all of Keefe's severance payments and returned them to Wayne Enterprises with hate words written in red, making Bruce Wayne think his company abandoned a victim of Superman.[2]

The loss of his wife and daughter made him bitter towards Superman, so as part of a protest he vandalised the Superman Statue and got himself arrested. He later paid Keefe's bail, and invites him to visit his mansion. There, Luthor wants Keefe to testify against Superman in a Senate committee, with Luthor also gifting Keefe with a motorized wheelchair as an extra bribe.[2]

Keefe keeps his end of the deal, and is present at the US Capitol when Superman arrives to the hearing. Shortly after the committee begins with the address of Senator June Finch, a bomb (secretly planted inside the wheelchair Luthor gave to Keefe) exploded, killing Keefe and all others present, except for the invulnerable Superman.[2][3] 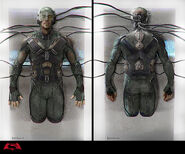 Wallace Keefe as Metallo
Add a photo to this gallery

Retrieved from "https://dcextendeduniverse.fandom.com/wiki/Wallace_Keefe?oldid=111767"
Community content is available under CC-BY-SA unless otherwise noted.