"What the hell are these things?!"
"The Trench! We're here!"
―Arthur Curry and Mera[src]

The Trench are a sightless, nocturnal and viciously monstrous subspecies of Atlanteans that dwell in the depths of the Kingdom of the Trench.[2]

In 3,000 B.C., the city of Atlantis sank into the ocean. The remnants of the city then morphed into the Seven Kingdoms. Due to unknown circumstances, the residents of one of the Kingdoms devolved into savage, monstrous beings, who, due to their dwelling in extreme underwater depth (even compared to the other Kingdoms), became known as the Trench.[2][3]

While Aquaman and Mera were journeying through the Mariana Trench in search of the Trident of Atlan, the Trench attacked them and their ship. They escaped them to the Hidden Sea, a realm found in Earth’s core, where they found Aquaman's mother Atlanna and the Trident of Atlan. When Aquaman obtained Atlan's trident and became the true heir of the throne, one controlled the Trench and commanded them to fight alongside him against his half-brother Orm and his forces.

"They're from the depth - they're scared of the light!"
―Aquaman, referring to the Trench[src]

The bodies of the Trench have uniquely evolved to function at over 2500 meters below sea level, a depth at which the water pressure hurts even the extremely durable Atlanteans. They've adapted to the environment by no longer relying on sight, and are almost entirely nocturnal. They have a fear of light and they usually shy from it. However, they can survive in the air without equipment, unlike most Atlanteans. They are also strong and durable enough to put up some fight against Aquaman and Mera, even as individuals. Their real power, however, is in their sheer numbers; they attack in massive herds that include thousands of them, enough to take down almost any creature there is.

They are largely savage animals that attack anything that comes near them. However, Aquaman, as the true heir of the throne as the wielder of the Trident of Atlan, is able to control them, a feat previously thought impossible.[2] 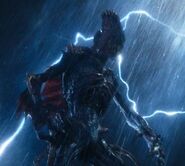 Retrieved from "https://dcextendeduniverse.fandom.com/wiki/Trench?oldid=198383"
Community content is available under CC-BY-SA unless otherwise noted.