Aquaman: Undertow
Aquaman: Arthur's Guide to Atlantis
Topo is an octopus associated with Atlantis[2] who was known to be a childhood friend of Arthur Curry. 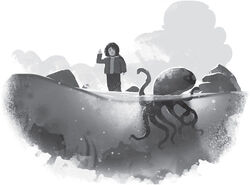 When Arthur Curry was around six years old, Topo was known to be a baby Octopus who often showed up at the beach on Amnesty Bay. Arthur was first alerted to his presence when Topo tickled his foot during one of Arthur's walks down the beach. When Arthur would wave to Topo, the octopus would for some reason wave back.

Over the next few years, Topo would continue to visit Arthur at the beach, with Arthur coming to call him Topo. On one particular day, after Arthur had reached the age of 13, Topo slid up onto the rocks of the beach as Arthur greeted him. Arthur remarked that he hadn't seen him for quite a while, which meant Topo must have been busy.

As Arthur continued to talk and walk on the beach, Topo would follow Arthur through the water alongside him. Arthur narrated his problems from several hours ago, when the sea creatures at Boston Aquarium had seemingly reacted to defend him in his time of need. This made Arthur wonder whether he had a certain power to communicate with sea life. Arthur then remarked on the ridiculousness of him talking over his problems with an octopus like Topo.[1]

Some weeks later, Topo was caught by a fisherman named Gilly in Amnesty Bay. Upon hearing of an octopus being captured, Arthur and his friend Claudia hurried over to the dock. By this time, Topo had become larger than most fishermen in Amnesty Bay, easily filling up an eight-feet long tank.

Arthur attempted to convince the fisherman to let it go, but it was for naught. The fisherman expressed his desire to sell Topo to the aquarium and hopefully make a little extra amount of money in the process. He attempted to placate Arthur by telling him that Topo would be well-cared for, but his attempts were only aggravated by Mike who started teasing Arthur about his obsession with sea creatures.

When Claudia asked Arthur if he was all right, Arthur began to feel that Topo hated staying in the tank. Arthur then began to pretend feeling sick, enlisting Claudia's help. As Gilly and the rest of the people were distracted by him, Arthur telepathically communicated to Topo that he should make his escape. Topo thus began to throw its mass and tentacles against the tank, rocking it back and forth until the tank flipped in the direction of the ocean, pouring Topo back into his domain, allowing him to swim away free.[1]

Duel in the Ring of Fire

He eventually found his way to Atlantis. During a Ring of Fire duel between Arthur and King Orm Marius, Topo played the drums.[3]

Topo has a non-canon appearance in the video game LEGO DC Super-Villains in the level "Ring of Fire", which is included as part of the Aquaman Movie Level Pack DLC. In the level, which as the name suggests tells the story of Arthur Curry's duel with Orm in the Ring of Fire as seen in the film, Topo's drum beats serve as the soundtrack for the entirety of the level. The level's conclusion comes when Orm is defeated by Arthur, and Topo grabs Orm with his tentacles and hugs him tight.