"Metropolis and Gotham City are very different, yet both have surmounted recent difficulties to forge ahead once more, displaying admirable resilience and civic spirit. And of course they are not just leading economic powerhouses, but also very alluring tourist destinations!"
―Temel Kotil[src]

Time Out Shortlist Gotham and Metropolis is a two-part in-universe guide book released in association with Turkish Airlines and Time Out Group as a canonical tie-in for the 2016 film Batman v Superman: Dawn of Justice. It was written by Daniel Wallace and published on February 16, 2016 by Time Out Group. The book is presented as two Time Out travel guides for the cities of Gotham City and Metropolis, set within the DC Extended Universe.

Time Out Guides are rated top guidebook brand by Which? Survey, for level of detail, photography, quality of maps, ease of finding information and value for money.

Time Out Shortlist Gotham & Metropolis selects the very best of the cities’ sightseeing, restaurants, shopping, nightlife and entertainment, with Time Out's trademark expertise. It also takes you straight to the latest venues, tips you off to the news and fashions and gives the dates that matter.

It's the best reference for anyone visiting Gotham & Metropolis in a handy size and easy to use format.

The guide has been written by Dan Wallace, author of ‘Man of Steel: Inside the Legendary World of Superman’ and the ‘The DC Comics Encyclopedia’, among other superhero inspired works. And it has been developed in collaboration with the filmmaking team behind Batman v Superman: Dawn of Justice.”[1] 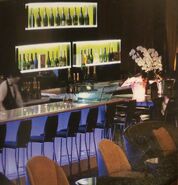 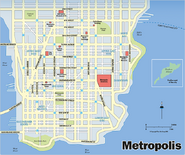