Themyscira is an isolated island in the Mediterranean Sea that was created by Zeus to serve as a home and sanctuary to the Amazons. It is also the birthplace of Zeus' demigoddess daughter Diana.

It is a city-state reminiscent of ancient Greece and is protected by a mysterious barrier that conceals the island from the outside world.

Creation of Man and the Amazons

When Zeus had created humanity, Ares held disdain for them and began corrupting men with hatred, violence, and war. In response to Ares' actions, Zeus created the Amazons, an all-female race of warrior women, to protect mankind from Ares by spreading love and compassion. However, men had enslaved the Amazons until Hippolyta and Antiope led them to rebellion and escaped.

Condemned by the Old Gods for his warmongering, Ares murdered nearly all the Old Gods, until he was left permanently weakened and banished to Earth by Zeus. In order to protect the world from Ares, Zeus fathered a daughter with Hippolyta imbued with his power so that she would one day defeat him. Furthermore, Zeus created the hidden island paradise of Themyscira for the Amazons that concealed them from Ares and the outside world before succumbing to his wounds he sustained at the hands of Ares.[1]

The Amazon Asteria helped her sister to refuge on the island while she was stopping a group of violent humans.[2]

For thousands of years afterwards, the Amazons flourished and lived in peace under the rule of Queen Hippolyta, preparing and training for the eventual return of Ares. Themyscira would remain undisturbed until 1918 during World War I, when Steve Trevor crash-landed off the coast of the island and was rescued by Princess Diana.

Soon after, the German Navy followed Steve Trevor to Themyscira where they fought the Amazonian army. The Amazons won the battle, but at the deaths of Antiope and several Amazons. Despite the protests of Diana, Hippolyta ordered no action to be taken in the war abroad.

That night, Diana broke into the large tower in Themyscira and took the Lasso of Hestia, her Amazonian shield, battle armor, and the God Killer sword to kill Ares. As Diana prepared to sail away with Steve, Hippolyta arrived and warned Diana that mankind did not deserve her. Afterwards, Diana and Steve sailed away from Themyscira and traveled to the United Kingdom.[1] 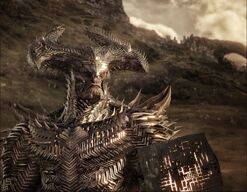 "Amazons, I have come to bathe in your fear."
"Daughters of Themyscira, show him your fear!"
"We have no fear!

"
―Steppenwolf, Hippolyta, and the Amazons[src]

After thousands of years of being guarded in the Penetralium, the Mother Box awoke. In response, the New God Steppenwolf arrived inside the building with a horde of Parademons and retrieved his first Mother Box from Themyscira, prompting Queen Hippolyta to warn her daughter Diana.[3]

The barrier which surrounds Themyscira