View source
watch 01:36
We're Getting Mutants in the MCU - The Loop
Do you like this video?
Play Sound

Temuera Derek Morrison (born 26 December 1960) is a New Zealand actor. He portrayed Tom Curry in the 2018 film Aquaman, and will reprise the role in Aquaman and the Lost Kingdom.[1]

He will also portray an undisclosed character in The Flash.[2]

Jason Momoa insisted on Morrison being cast as his character's father because of the latter's critically-acclaimed performance in Lee Tamahori's 1994 film Once Were Warriors, which had a profound effect on Momoa growing up. In fact, Tom's line to Atlanna in the opening scene, "I was gonna cook you some eggs", is a tribute to a similar line from Once Were Warriors.[3] 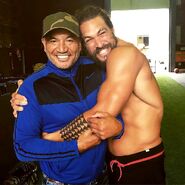