Suicide Squad: Behind the Scenes with the Worst Heroes Ever

"So that's it? What, we some kind of Suicide Squad?"
―Deadshot to Rick Flag[src]

Following the death of Superman,[1] various Metahumans, such as Aquaman, Flash and Cyborg, were inspired to use their powers to fight crime; the Human race was also profoundly impacted by his selfless act.[2] ARGUS's Director Amanda Waller became fearful that other superpowered Metahumans could bear hostile intentions and would turn against humanity, fearing the government's lacking any way to counter them. She proposed forming a task force comprised of expendable individuals with exceptional powers and abilities who could counter them. To get approval for the team's formation, Amanda Waller had Dr. June Moone attend a government meeting where she turned into an ancient mystical being known as the Enchantress and teleported to Iran where she handed over Iranian nuclear plans, and thus, Waller's plans were approved and the team's formation was authorized with Rick Flag being chosen to lead the team.[3]

After the team was approved for formation, Amanda Waller and Rick Flag traveled to Belle Reve where the former began to conscript the first members. Deadshot, Harley Quinn[4], Killer Croc, and El Diablo were all conscripted into the team with Deadshot being the first one drafted. When all four were brought out and presented, they had chips injected into them which were nano-bombs to keep them at bay, halting any attempt to escape.[3]

One night in an apartment in Midway City, Dr. Moone was transformed into the Enchantress and she teleported to where her brother, Incubus, was being held and released him. She then waited as Incubus built up his powers and after doing so, he possessed Gerard Davis, beginning to wreak havoc on Midway City. Rick Flag and a team of ARGUS soldiers were deployed with Enchantress to back them up. The Enchantress betrayed them and joined up with her brother and avoided her death.[3]

After Incubus had awakened, the team was assembled and brought to the city to evacuate and extract an unknown target. The original four members were brought in and Rick Flag showed up as well. Captain Boomerang was then dragged in and drafted into the team as well and shortly afterward, Slipknot was presented, finalizing the team. Rick Flag began discussing the objective of the group and what they'd need to do, letting them know of the explosives keeping them in line. Waller appeared to make a speech and Deadshot joked about how the team was a "suicide squad". Finally, after assembling their gear, Task Force X was introduced to Rick Flag's bodyguard Katana, before the team was then deployed to Midway City via helicopter to terminate Incubus.[3]

Task Force X soon arrived in Midway City where Incubus has already assembled an army of monstrous soldiers to defend him and Enchantress as they built up their weapon. Their helicopter was promptly shot down, but all of the members of Task Force X survived and they got out accompanied by ARGUS soldiers, heading to stop Incubus and Enchantress. Shortly after the squad went in, Captain Boomerang managed to convince Slipknot to escape, suggesting that the nano-bombs were a fakeout. He shot a grappling gun on to a nearby building, but his bomb was activated by Flag, killing him. The remaining squad members saw this, understanding that Waller wasn't lying.[3]

As the squad moved in, they came across a street where two of Enchantress' soldiers were seen on patrol. Waller ordered the group to withdraw and continue with the mission, but they were spotted and a fight broke out. Deadshot was one of the first to engage them next to Rick Flag and a group of ARGUS soldiers as Enchantress' minions continued to pour in. The rest of the squad entered the fray, but they were overwhelmed by the enemy and Rick Flag was dragged to Enchantress, before being saved by Harley Quinn and Deadshot.[3]

As the squad under Flag went on with the objective, Squad B was overwhelmed and taken prisoner by Enchantress's soldiers and inevitably turned into Eyes of the Adversary soldiers. As they arrived at the building where HVT1 is, the squad faced little opposition until they entered the secure floors of the building where Enchantress' soldiers engaged them again. Flag was taken again and the squad had to protect him lest they become the casualties. After they had cleared the rooms, the squad was pinned again by enemy fire, but Deadshot managed to convince El Diablo to use his powers to help relieve the team.[3]

As the task force reached the objective, HVT1 was discovered to be Amanda Waller herself; she killed the remaining ARGUS staff who had no clearance to find out about Task Force X and was escorted to the roof of the building for extraction. Their extraction, however, was highjacked by the Joker and his minions, who disabled Harley Quinn's nano-bomb; Waller offered to free Deadshot and reunite him with his daughter, but Deadshot decided to follow his moral compass and deliberately miss Harley, forcing Waller to order their helicopter to be shot down. She then rode on the next helicopter to attempt to leave the city, only for Incubus to shoot the helicopter down and take Waller prisoner, bringing her to Enchantress and her weapon. The task force then traveled to the crash site, and Deadshot found out the truth about Enchantress, enraging him and forcing Flag to tell the truth. Deadshot and the team decided to abandon the task force, even with the potential consequences and went to a nearby bar.[3]

Truth, reassembly and completion of the objective

Deadshot, Harley Quinn, Captain Boomerang, Killer Croc, Katana, and El Diablo went to a nearby bar, celebrating them almost finishing their job. They then deliberated with each other regarding their situations, until Flag came in and tells them about the fact that he and June Moone were dating, forcing him to admit his situation too. With the revelation, Flag officially dismissed the squad by destroying his control pad, relieving them of their consequences. Flag also showed Deadshot letters from his daughter, saying that Zoe wrote to him every day; shocked, Deadshot decided to force Flag to complete the mission, wanting his daughter to see that he's not just a criminal, Deadshot then asked everyone to regroup and finish the task at hand, with all of them agreeing.

With the squad back in tow, Flag then divided the team to two separate missions: his SEAL teammates and Killer Croc would go under the flooded subway system to retrieve a potent demolition charge to destroy Incubus, while he and the rest of the squad distracted Incubus and Enchantress. Enchantress saw this and implanted visions into the squad's minds, but El Diablo's guilt over the loss of his family made him see through the visions and rallied the squad to fight. Incubus then appeared to attack the squad, but El Diablo showed his true power and manage to corner Incubus to the location of the bomb. El Diablo, Incubus, and Lt. "GQ" Edwards died when the bomb exploded and forced Enchantress to wade in personally after her weapon was completed. The squad then engaged Enchantress, with Killer Croc entering late in the fight; Enchantress disarmed the squad and promised them safety if they served her, with Harley Quinn feigning agreement to get close enough and rip Enchantress's heart using the Soultaker. With the heart out, Flag activated a second explosive which was thrown by Killer Croc, while Harley passed her revolver to Deadshot; Enchantress tried to trick Deadshot by implanting another vision to him, but Deadshot saw through it and shot the explosive on time, destroying the weapon and saving the world.[3]

With the weapon destroyed and the heart cut out, Enchantress was weakened enough that Flag threatened to kill her unless she could bring back June Moone. Calling his bluff, Enchantress claimed not being able to bring her back, which forced Flag to crush the heart, remembering a promise he made to June. With Enchantress dead, it was assumed that June would die with her, however, Deadshot noticed that beneath the skin of Enchantress, something was moving: June had indeed survived the ordeal and was reunited with Flag. The rest of the squad then tried to leave on their terms, but Waller had survived and still held her phone which could activate the nano-bombs, except for Harley's. With this leverage, Waller commuted 10 years of the Task Force's prison sentence, but she was also forced to grant many perks to the squad members: Deadshot was permitted regular and sporadic supervised visits to his daughter, with one particular time helping her homework and access to writing equipment to write back letters for his daughter; Harley Quinn was given an espresso machine and access to books; while Killer Croc was given access to a TV and better meals and drinks. Only Captain Boomerang was denied any perks, due to the death of Slipknot and his attempt to escape.[3]

Not long after, Waller met with her situational ally Bruce Wayne, who agreed to protect Waller from any potential fallout from the Midway City incident and Waller giving him files regarding other Metahumans that she knew of. She then disclosed the fact that Wayne should "stop working nights," acknowledging that she knew he was Batman, with Bruce responding to that by asking Waller to shut Task Force X down.[5] 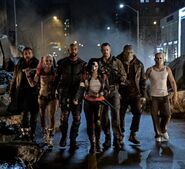 Retrieved from "https://dcextendeduniverse.fandom.com/wiki/Task_Force_X?oldid=129036"
Community content is available under CC-BY-SA unless otherwise noted.