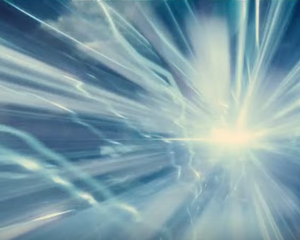 "It's like this layer of dimensional reality that seems to manipulate spacetime. I call it the Speed Force."
―Barry Allen explaining the Speed Force to Bruce Wayne[src]

The Speed Force is the name given to an extra-dimensional plane that grants Barry Allen the metahuman speedster powers which he uses as the Flash.

One night, while working on his late mother's case, Barry Allen was struck by lightning and doused with some nearby chemicals, which granted him access to the Speed Force, and in turn, allowed him to move, think and act at superhuman speeds, as well as the ability to vibrate his body on a microscopic level.[1]

At some point after the Justice League defeated Steppenwolf, Barry found himself inside the Speed Force, in which he came face to face with the Barry Allen of Earth-1. The two conversed for a short amount of time before Barry vanished, but not before Earth-1's Barry inspired him to take on the codename "The Flash."

Those with access to the Speed Force are genetically altered, acting as conduits for its energy, granting them a lean, slender build in order to adapt to their newfound speedster abilities.

Access to the Speed Force grants speedster's tremendous hypersonic speed (though from their perspective, things appear to be moving in super slow motion), the intensity of which allows them to deliver superhumanly strong blows (via the incredible momentum generated at superspeed), as well as the ability to run up and along vertical surfaces, across the surface of water, through solid matter, into other planes of frequency, and even though time.

One minor drawback born of a speedster's connection to the Speed Force, is an accelerated metabolic rate, thus requiring a speedster to consume high amounts of calories in order to function normally whenever the speed is used, as well as allowing them to heal and regenerate from any bone or flesh injuries without lingering side-effects within a short time span, even if those injuries are highly crippling/fatal.

Also, a speedster possesses agility, dexterity, balance, and bodily coordination on superhuman levels, allowing them to easily maneuver while running. Their stamina is likewise increased to withstand the stress of moving at superspeed for extended periods of time without growing tired or weak.

Finally, when moving at incredible speeds, a speedster generates bolts of lightning, which can cause electronic technology nearby to short-circuit, overload or even burst into sparks. According to Amanda Waller's files, the Flash can also charge the air vortexes that he generates with Speed Force electricity, thereby further increasing his offensive and defensive capabilities.

Retrieved from "https://dcextendeduniverse.fandom.com/wiki/Speed_Force?oldid=141233"
Community content is available under CC-BY-SA unless otherwise noted.