Slipknot
Man Who Can Climb Anything

Time Out Shortlist Gotham and Metropolis (mentioned)
Suicide Squad: The Official Movie Novelization
Suicide Squad: Behind the Scenes with the Worst Heroes Ever

"Here comes Slipknot, the man who can climb anything. Wonderful."
―Rick Flag[src]

Christopher Weiss, better known as Slipknot, was an American rope and knot expert skilled at rope climbing. He was eventually apprehended by Wonder Woman in 2002 and transferred to Belle Reve by Amanda Waller, where he became a member of Task Force X.

Slipknot hardly got to participate in the Squad's mission of taking down Enchantress and Incubus as he was tricked by Captain Boomerang into getting himself killed from his implanted nano-bomb.

Christopher Weiss was born on February 23, 1984, in Montgomery, Alabama, into a tribe of Saulteaux, and grew up learning professional rope-climbing. He worked as a formulation chemist at Leaston Howard Inc., where he invented a supremely powerful adhesive and concealed it from his employers. Weiss tested his invention over several months and applied the adhesive to various burglary tools.

Finding the application extremely useful, he left the incorporation to become a professional criminal, robbing various financial institutions in Montgomery before moving to Keystone City.[2] There, Weiss became as a lethal assassin "who can climb anything", code-named "Slipknot", and used extremely durable ropes and harnesses using his special adhesive, but was captured in 2002 by Wonder Woman.[3]

Slipknot joined Task Force X in the evacuation point outside of Midway City, shortly before they are to fly out to their destination. He is forced out of a car and is verbally slurred at by a woman in the vicinity whom he promptly punched in the face. He was briefly introduced by Rick Flag who mentions his prowess with rope work. Task Force X is given instructions by Amanda Waller that, under the command of Colonel Rick Flag, they are to extract HVT-1 from Midway City in exchange for time taken off their prison sentences. The team equips their old uniforms and weapons before flying in a helicopter to the besieged city.[4]

"Mind games."
"What's that?"
"This whole bomb in the neck crap. It ain't real, mate."
―Captain Boomerang and Slipknot[src]

Soon after crash landing in Midway City, Slipknot was marching through the streets with his fellow members of Task Force X. Captain Boomerang walked up to him and told him that the team is just being played by Flag and Waller and that the whole "bomb in the neck crap" speech was just psychological manipulation. He told Slipknot that he was planning on escaping and asked if he'd join him, which he did. Suddenly, Boomerang and Slipknot attacked some of the soldiers to escape, and after breaking one soldier's neck, Slipknot managed to grapple away to nearby rooftops. However, Flag noticed and detonated the nano-bomb in Slipknot's neck, instantly decapitating him and leaving his body hanging from a building by one of his ropes.[4]

Slipknot was an assassin who had no qualms about brutally punching a woman who insulted him. He remained very quiet throughout his time with the Suicide Squad, only speaking with Captain Boomerang. It can be assumed that he is the most intelligent Squad member (along with former expert psychologist Harley Quinn), as he has a background in formulation chemistry and developed his ropes' powerful adhesive.

Despite his intellect, Slipknot was somewhat gullible and less intelligent in practical life, as he was easily tricked by Captain Boomerang into to escaping, leading to his death. 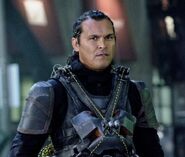 Retrieved from "https://dcextendeduniverse.fandom.com/wiki/Slipknot?oldid=141880"
Community content is available under CC-BY-SA unless otherwise noted.