"Don't make me throw you outta here, Thad. You don't need to make a scene."
―Sid Sivana to Thaddeus Sivana[src]

Sidney "Sid" Sivana was Thaddeus Sivana's brother and tormenter. He later became to be a member of the board of directors in Sivana Industries and was killed by his vengeful brother.

In 1974, young Thaddeus was transported to the Rock of Eternity to be chosen as the champion of the wizard Shazam, but was rejected due to not being pure of heart and sent back. Thad, confused, yelled and caused his father to crash the car and become crippled, and Sid blamed Thad for the incident.[1]

Sid grew up and went on to join his father in Sivana Industries, becoming a member of the board of directors.[1]

Thaddeus, after gaining his powers from the Seven Deadly Enemies of Man, entered a board meeting, confronting his father about the incident. Sid stopped him and threatened to throw Thad out. Thad then asked Sid to ask the Magic 8 Ball what his chances were of throwing him out. Thaddeus then proceeded to grab Sid with his newfound strength and throw him out the window to his death.[1]

Sid Sivana was a very mean, sadistic, rude and abusive brother to Thaddeus. He is usually very fearful when his father would lose his temper. 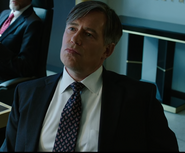 Retrieved from "https://dcextendeduniverse.fandom.com/wiki/Sid_Sivana?oldid=115367"
Community content is available under CC-BY-SA unless otherwise noted.