Shazam! Fury of the Gods

Shazam! Fury of the Gods[3] is an upcoming 2023 superhero film that is currently in development.[1] The film is a sequel to Shazam! and it will be the thirteenth installment in the DC Extended Universe. It is scheduled for release on June 2, 2023.[2]

In April 2019, The Wrap reported that New Line Cinema is developing a sequel with Henry Gayden returning to write the film, along with David F. Sandberg directing and Peter Safran producing.[8]

However, on April 20, 2020, it was announced that the film would be delayed to November 4, 2022 due to the COVID-19 pandemic shifting around the release dates of several films. Its intended release date would be taken by The Matrix 4.[10]

At DC FanDome in August 2020, it was revealed the sequel will be titled Shazam! Fury of the Gods.[11] 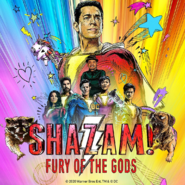 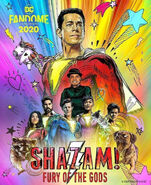 Unofficial poster featuring Sinbad
Add a photo to this gallery

Retrieved from "https://dcextendeduniverse.fandom.com/wiki/Shazam!_Fury_of_the_Gods?oldid=159578"
Community content is available under CC-BY-SA unless otherwise noted.