View source
watch 01:39
Hawkeye Is Here To Amaze - The Loop
Do you like this video?
Play Sound

Shazam!: Freddy's Guide to Super Hero-ing is a tie-in novel to Shazam!, released on February 26, 2019. It is framed as one notebook's length of Freddy Freeman's diary.

An Australian limited edition version of the Shazam! home release featured a digibook version of Freddy's Guide to Super Hero-ing. This is similar to the Target store exclusive versions of the previous films in that they included selections from their various art books, but since an art book was never released for Shazam!, Target never had an exclusive variant of the home media.

In this jam-packed guide, follow Shazam and his best friend Freddy as they take you through everything you need (and ever wanted) to know about being a real super hero.

With entries from both Freddy and Shazam, the guide provides you with step-by-step instructions, from flight tests to high-tech suits. This imaginative guide is sure to be a hit with fans of the hilarious DC character.[1] 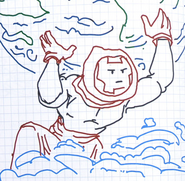