Brian Durlin, also known as Savant, is a self-styled vigilante and a computer hacker who uses most of his skills to blackmail people.[1] 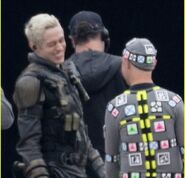 Retrieved from "https://dcextendeduniverse.fandom.com/wiki/Savant?oldid=103514"
Community content is available under CC-BY-SA unless otherwise noted.