"Not everyone gets to be what they want to be all the time. Me? I am an actor. I love acting. I didn't want to be a soldier. But I'm the wrong color. Everyone is fighting their own battles, Diana. Just as you are fighting yours."
―Sameer to Diana[src]

Sameer was an ally of Diana and Steve Trevor during World War I. He died sometime later after the war ended.

Sameer was born in Morocco, and at some point learned numerous foreign languages, and gained considerable acting skills. He was, however, unable to become an actor, due to arabophobic discrimination, so he instead becomes a skilled liar and deceiver. Ultimately, Sameer actively participates in World War I as a spy, befriending fellow spy Steve Trevor in the process.

Fighting with Steve Trevor and Diana

Sameer was first seen in a bar in London where he was recruited by Steve Trevor for his and Diana's mission he was promised money for two days.

After liberating a village, Sameer chose to stay with the group without payment and acted as Steve's driver when he infiltrated the German event.

Sameer was present when Steve boarded the plane he aided the others in clearing a path for Steve. Sameer died sometime later after the war ended.

Sameer is charming, open-minded, improvisational, and intelligent, though he has an occasional penchant for spinning elaborate lies. As an Arab, Sameer is bitter about his race complicating his lofty ambition to become an actor, but he resolutely maintains the ambition nonetheless. While Sameer initially only has purely monetary interests when joining the Wonder Men, seeing Wonder Woman's compassion and unbreakable spirit in action boosts his morale and energizes Sameer past the point of sheer profit, inducing him to both take active initiative and adamantly refuse to abandon the team once their mission increases in length and complexity.

Possibly due to having been on the receiving end of arabophobic discrimination, Sameer shows no racism whatsoever to Chief, and is also quite open-minded, believing that there might be some truth to Wonder Woman's story about the God of War Ares (despite Charlie, and Steve Trevor's skepticism).

"Sameer's a top undercover man. He can talk the skin off a cat in as many languages as you can."
―Steve Trevor[[Wonder to Diana|[src]]] 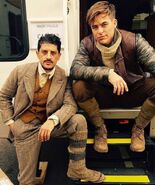 Saïd Taghmaoui and Chris Pine.
Add a photo to this gallery

Retrieved from "https://dcextendeduniverse.fandom.com/wiki/Sameer?oldid=127222"
Community content is available under CC-BY-SA unless otherwise noted.