"Please don't say anything weird to Billy"
"You mean like how the Romans used to brush their teeth with their own urine?"
―Rosa Vasquez and Freddy Freeman[src]

Rosa Vasquez is the wife of Victor Vasquez[1] and the foster mother of Billy Batson.

Rosa was orphaned as a child and spent her formative years living in a series of foster homes, many of which she attempted to escape from. Later on she met a fellow orphan, Victor, whom she married. They later divorced but then re-married and started their own household in Philadelphia where they raised their own foster family, wishing to give the children a better childhood experience than they had themselves.[2] 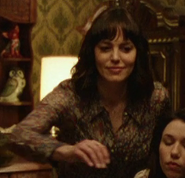 Retrieved from "https://dcextendeduniverse.fandom.com/wiki/Rosa_Vasquez?oldid=106242"
Community content is available under CC-BY-SA unless otherwise noted.