"Listen up! In your necks, injection you got, it's a nanite explosive. It's the size of a rice grain, but it's powerful as a hand grenade. You disobey me, you die. You try to escape, you die. You otherwise irritate or vex me, and guess what? You die."
―Rick Flag to the Suicide Squad[src]

Colonel Richard "Rick" Flag Jr. is a US special operations forces specialist (among the finest ever produced by the country), and the lover of June Moone. He was recruited by Amanda Waller to lead her new Suicide Squad team, alongside a team of Navy SEALS, in a high-risk operation to defeat Enchantress.

"I have the witch's heart. And Dr. Moon has his. Now he'll follow my orders as Holy Writ."
―Waller, on her control over Flag[src]

Rick Flag is known to have graduated from the prestigious West Point. He proceeded to serve an unknown number of tours in the United States Military, before getting assigned to ARGUS, under the jurisdiction of Amanda Waller. She promptly sent Rick on a mission to subdue the Enchantress that possessed June Moone. Rick and June quickly got close, becoming lovers. He also ran into the formidable samurai warrior Katana, and managed to convince her to become his personal bodyguard.[1]

"All those rumors, and my dumb ass didn't believe them."
"Most people don't."
―Flag and Waller[src]

Following the approval of Waller's Task Force X pitch to the Pentagon, Rick was assigned by her to be the task force's field commander. He attempts to object, however, stating that Waller needs actual soldiers instead of criminals and supervillains. Ultimately though, Waller forces him to comply and accept his position by revealing the debilitating leverage she had over him.

Flag soon accompanied Waller as he arrived at Belle Reve in Louisiana to recruit the members for the task force. Upon arrival, he was greeted by Captain Griggs and was first introduced to Deadshot at the firing range to test the alleged hitman's skilled marksmanship. Deadshot impressed Flag and Waller on the shooting range; then Deadshot listed his demands to Waller, but saying it to Flag, knowing the hierarchy. He also saw Killer Croc in Belle Reve.[1]

Before Task Force X was activated, a Non-Human Entity known as Incubus appeared in the subway of Midway City, causing havoc. Flag and a Special Forces team was sent in with the help of June Moone, who was possessed by a metahuman called Enchantress; Enchantress' ability to move instantly was the key to approaching Incubus, however, unbeknownst to the team and Waller, Enchantress had planned Incubus' release and when tasked to destroy him using a powerful demolition charge, Enchantress bolted, leaving the operation in tatters. In response to this, the Pentagon decided to activate Task Force X and gather them in Midway City Airport.

Flag arrived with two squads of Navy SEALs and authorized them to gear up for the mission. Prior that, Flag explained that the Task Force has been injected with a nano-explosive that will kill them and that any sign of dissent would lead to their deaths. After briefing from Waller to extract "HVT1", the team then departed for Midway City, with Katana promptly joining them, with another helicopter carrying squad B escorting them. When they arrived in the city, their helicopter was shot down. Flag killed Slipknot after attempting to escape after he was tricked by Captain Boomerang into thinking that the bombs were a ploy.[1]

Following the presume death of Amanda Waller, the team decided to drown their sorrows with a drink. Distraught over what had happened, Flag smashed the detonator to the Squad's neck implants, allowing Harkness to then leave. He then gave Lawton the letters his daughter had written him while he was in prison. Angered by the sudden revelation, Lawton told Flag he would help him get to the Enchantress so that his daughter would know that he wasn't just "a piece of shit".[1]

"Uh, hey, man. I know you can't hear me 'cause you're trapped in your temple of soldierly self-righteousness, but a two-faced dude like you wouldn't survive a second on the street."
―Deadshot to Rick Flag[src]

Highly trained in the prestigious West Point, Rick Flag is very intelligent and confident in his abilities. Flag's tough military attitude, however, does occasionally make him seem less intelligent than he actually is. When in combat, he tends to be very serious and short-tempered, particularly when concerning other allies' mistakes. Also, Rick has a rather negative view of the Suicide Squad, vocalizing his outrage when Harley Quinn nonchalantly steals things. As a result, Flag requested Deadshot's assistance in maintaining the team in check. Moreover, Flag is quite loyal to Amanda Waller and ARGUS, despite the intimidating rumors around her. Indeed, Rick even notes one can get used to Waller's ruthless personality after a while.

Rick's softer side comes from his love for June Moone, the unwilling host of the fearsome and malevolent Enchantress. Having been assigned to watch her, Rick promptly fell in love and they began dating. Hence, he follows Waller's orders "as Holy Writ", to protect his lover, whom Waller uses as exploitable leverage over him. In addition, the events in Midway City seem to have allowed Rick to gain a better understanding of the Squad members, with him ultimately destroying his nano-bomb detonator and releasing them from the mission after Waller's capture, giving up Zoe Lawton's letters to Deadshot, happily hugging Deadshot upon their victory over Enchantress, and making sure Deadshot's first supervised visit to his daughter lasts a few moments longer.

"Let me hit the Tier One units and I'll build you a team of pipe hitters who'll do anything you can dream up. I mean, you need real soldiers. Not these scumbags."
―Rick Flag to Amanda Waller[src]

"I don't do luck. I do planning and precision."
―Rick Flag to Amanda Waller[src]

"That can change with a phone call. I have friends, too, you know."
―Rick Flag to Amanda Waller[src]

"I'm a soldier! And you're a serial killer who takes credit cards."
―Rick Flag to Deadshot[src]

"You cut and run, I'll blow your head off."
―Rick Flag to Deadshot[src] 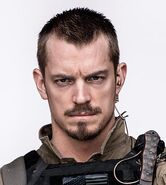 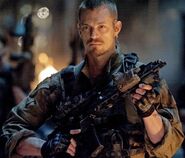 Retrieved from "https://dcextendeduniverse.fandom.com/wiki/Rick_Flag?oldid=103454"
Community content is available under CC-BY-SA unless otherwise noted.