"Sionis is gone, but it’s just a matter of time before some other asshole tries to finish what he started... We got to clean this city from the inside out."
―Renee Montoya[src]

Detective Renee Montoya is a former member of the Gotham City Police Department, whose obsession with Black Mask leads her to build a case against the crime lord, but then joined the Birds of Prey to help take him down.

She is a long-time detective within the Gotham City Police Department, having regularly been passed up for promotion within the male-dominated organization, despite her proven skills and track record.

She has built an extensive case against the Black Mask, but Captain Patrick Erickson refuses to consider bringing the case to the D.A. due to Black Mask, a.k.a. Roman Sionis, being a powerful and influential crime lord and too big to move against. Meanwhile, she also pursues Harley Quinn after she blows up Ace Chemicals and unwittingly leaves behind a necklace given to her by the Joker. Her efforts eventually lead her to one Cassandra Cain, who has stolen and swallowed the Bertinelli diamond, a valuable gem that is the key to unlocking the fortune of the Bertinelli crime family.[1]

Forming the Birds of Prey

When Harley Quinn arrived at the Gotham City Police Department and busts Cain out of jail, she continues to pursue her. She eventually catches up with her at an abandoned waterpark amusement park, where she discovers that Quinn has taped Cain to a toilet and dosed her with laxatives in the hope of retrieving the diamond, which she had swallowed. She very nearly takes Quinn down, but soon discovers that there are multiple forces on both sides that are after Cain, including an entire small army hired by the Black Mask. She ends up teaming up with Quinn, Black Canary, the Huntress and Cain so that they can all get out alive. Her skills as a hardened and sharp-witted cop prove very valuable in the fight and the entire group makes it out alive, the Black Mask meets a watery and grisly end.

Afterwards, she along with the Huntress and Black Canary use a portion of the proceeds from the fortune of the Bertinelli diamond to form the Birds of Prey.[1]

She is known for spouting lines which sound as they come out of '80s cop films. She harbors resentment against Captain Patrick Erickson for him having taken the promotion that should have been hers and taking credit for her achievements. Despite this, she is dogged and determined, pursuing her investigation into the Black Mask without the support of her teammates. Her sense of justice will not allow a wrong such as the Black Mask's criminal operation to go uncorrected. Despite her years of service to the Gotham City Police Department, she ultimately has it within her to quit when she realizes that she can no longer be effective as a force for good there. 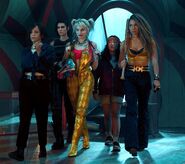 Montoya stands with the Birds of Prey

Montoya helps with a fire

Montoya leads the Birds into battle

Huntress sneaks up on Montoya

Retrieved from "https://dcextendeduniverse.fandom.com/wiki/Renee_Montoya?oldid=130721"
Community content is available under CC-BY-SA unless otherwise noted.