In Metropolis, Jacob Washington, an elementary school student, rides to school with his new neighbor Lucas to his first day of school, who is excited to see Superman flying in the air. At school, he goes on a field trip to S.T.A.R. Labs with his writing club alongside a Daily Planet reporter, Clark Kent, who writes for the world beat and science news. On the bus, Jacob witnesses Lucas getting bullied around, who regrets not helping him. At S.T.A.R. Labs, the class learns about their latest experiment with tachyon transference in order to teleport non-organic material across vast distances, such as teleporting materials for the international moon base. Dr. Forsythe, the lead scientist on the experiment, prepares to do a quick burst of tachyon transference on the portal pad for the class. Suddenly, the hostile Ko'erst appear on the portal pad and Forsythe inexplicably increases the tachyon gain, opening the portal more. The Ko'erst explain that Forsythe was being telepathically controlled ever since he had inadvertently accessed the Ko'erst homeworld. They say that Earth would serve as a suitable outpost for them with miminal terraforming. Suddenly, Superman appears at S.T.A.R. Labs to close the portal. Despite Forsythe's protests that it can't be disabled, Superman uses his superhuman strength to destroy the portal pad to stop the second party of aliens. The Ko'erst then combat Superman, throwing him outside and attempt to kill him with their laser blasts. However, Superman breaks free and fights the three of them, incapacitating them and restraining them in a metal statue outside S.T.A.R. Labs. Forsythe meets Superman and explains that he can design frequency scramblers to disable their telepathy until they can repair the portal pad and send them back to their homeworld. Jacob and his class is sent back to school, where Jacob sees Lucas getting bullied again. Regretful at his previous inaction, Jacob stands up to the bullies, who threaten to beat up him and Lucas. Suddenly, the bullies are scared off, and Jacob and Lucas realize Superman is standing behind them. Superman returns Jacob's journal, which he had lost during the Ko'erst attack, and encourages him to continue his aspiring journalist career as well as congratulating Jacob for standing up to the bullies. He welcomes Lucas to Metropolis before he flies off into the sky. Excited, Lucas becomes proud to live in Metropolis while Jacob records his experiences in his journal. 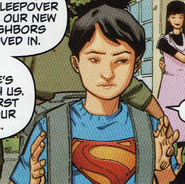 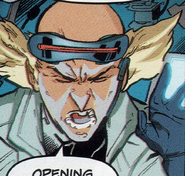 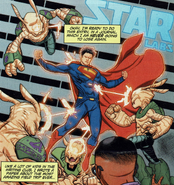 Retrieved from "https://dcextendeduniverse.fandom.com/wiki/Playground_Heroes?oldid=108156"
Community content is available under CC-BY-SA unless otherwise noted.