Man of Steel: Inside the Legendary World of Superman
Man of Steel: The Official Movie Novelization
Justice League: The Art of the Film
Aquaman: Arthur's Guide to Atlantis

A plasma carbine is the standard armament of technologically advanced societies. They're used by the Kryptonian Warrior Guild on Krypton, the Parademons of Apokolips, as well as by the Atlantean Guard of Atlantis. A large majority of these rifles were passed down the caste for generations on Krypton, and like most Kryptonian technology, were built to last.

Millennia ago, Steppenwolf and his armada from Apokolips made Earth fall from the height of human civilization. His army of parademons and other such hellish acolytes made use of Apokoliptian plasma weaponry during the battle against the united sects of Atlantean, Amazonian and Human cultures, who were aided by divine legends and entities from beyond the stars.[1]

A weapon similar to a Kryptonian make saw much action during the short-lived Kryptonian Civil War, where General Zod and his forces used these weapons in a coup attempt to end the prominent bloodlines of Krypton's society, targeting members of the Kryptonian Law Council, the Sapphire Guards, as well as others loyal to High Eminence Ro-Zar.[2][3]

They would be used again after Krypton imploded when Zod scoured the galaxy for the supplies from old Kryptonian outposts, and when he enacted his plans for Earth.[2][4]

Steppenwolf would again be summoned to Earth by his missing Mother Boxes. This time, his parademon hordes preceding him in staking his claim to the earth, armed with their Apokolips Plasma Rifles, which they would later use when assailing the Justice League and otherwise going on the warpath in their master's name.[1]

During the epic conflict between Arthur Curry and his warmongering half-brother Orm, the elite Atlantean Guard, who the former fought against, were armed with plasma weaponry of Atlantean craft. Plasma was released to power both their artillery and surface traversal gear, which increased the power of their physical melee. A pirate & mercenary named David Kane was outfitted with prototype plasma weaponry he had modified into a high octane battle suit while in pursuit of Aquaman.[5]

The weapon fires a burst of blue-hot plasma which burns through armor and flesh with ease. However, plasma carbines do not have as much of an effect on yellow sun-powered Kryptonians, as Superman was merely knocked to the ground by a massive shot fired from a Kryptonian dropship. 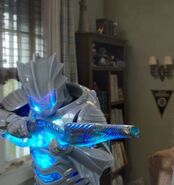 Atlantean variant
Add a photo to this gallery

Retrieved from "https://dcextendeduniverse.fandom.com/wiki/Plasma_carbine?oldid=129142"
Community content is available under CC-BY-SA unless otherwise noted.