Emily reflects on the grim and hopeless atmosphere of Gotham City, wrought with too many disappointments and too much darkness to believe in legends or stories, until the appearance of the Batman. At the Carytown Crossing district, Emily sees criminals in a speeding getaway car and witnesses Batman on a motorcycle and crashing it onto the car, spilling numerous of CDs. Emily remarks on how Gotham City views the Batman: the police as a criminal, the news media as a hoax, her friends as a myth, and their parents as an urban legend, but disregards all of it as she sees Batman up close as a human as he disposes the criminals' CDs into the gutters. At school, she tells her friends Hailey, Brian, and Jacob that she saw Batman in the flesh, but Brian doesn't believe her and claim that Batman is nothing but a fairy tale. Later at night, Emily sneaks into the crime scene at the Carytown Crossing district and she finds a CD that Batman missed, using the opportunity to take pictures to the Batman to prove his existence to her friends.

The next day, she prints off the best picture of Batman and is about to show it to her friends, but Brian mocks her and Hailey tells him to knock off, saying that the biggest kindness you can show is doing the thing that you don't do. Emily decides not to show the picture to her friends and, later that night, at her apartment, she meets Batman outside her window and he asks her to do the right thing and destroy the photo. She rips up the photo and deletes it from her phone, as she explains to herself that by concealing Batman as a human, he can be anything to criminals, like a ghost or a shadow or a legend to Gotham City. 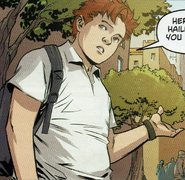 Add a photo to this gallery
Retrieved from "https://dcextendeduniverse.fandom.com/wiki/Picture_Proof?oldid=161050"
Community content is available under CC-BY-SA unless otherwise noted.