While very quiet and a poor student, Pedro is perceptive and noticed Billy's discarded notebook and realized he is looking for his parents.

He is threatened along with the rest of his foster siblings by Thaddeus Sivana in order to gain Shazam's power. However, all of them were granted the power of Shazam, allowing them to defeat the villain and his demonic allies.[3]

"Check out these guns."
―Pedro Peña[src]

Divine Empowerment: After shouting "Shazam!" while holding the Wizard's staff, Pedro was given the ability to transform. When transformed, Pedro has many powers and abilities, which exceed the capabilities of humans. 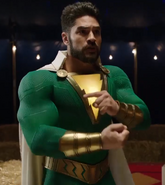 Retrieved from "https://dcextendeduniverse.fandom.com/wiki/Pedro_Pe%C3%B1a?oldid=107430"
Community content is available under CC-BY-SA unless otherwise noted.