View source
watch 01:03
What are Parademons?
Do you like this video?
Play Sound

"The Unity cleanses a planet with fire, transforming it into a copy of the enemy's world. All who live become servants of Darkseid, alive but drained of life: parademons."
―Wonder Woman[src]

Parademons are a sentient, genetically modified species created when altering other species with the Mother Boxes. Although subservient to the overlord Darkseid, they are actively employed by his generals.

They were notably employed by a younger Darkseid during his attempted planetary invasion of Earth, and later again by Steppenwolf in his battle against the Justice League.

Parademons are created by the tried and true process of deconstructing and repurposing genetic material from dead and captured enemies of Apokolips with the Mother Boxes. Newly created Parademons are then processed, trained, and enhanced to serve Darkseid.[1] 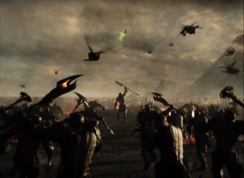 Parademons were used as Darkseid's army when the New God first attempted to conquer Earth. During this invasion, countless hordes of Parademons emerged from the Apokoliptian dropships, requiring the combined might of the Amazons, Atlanteans, and armies of Mankind to match their numbers and manage to fight them back. With the assistance of the Old Gods and Yalan Gur, the Parademons were defeated along with Darkseid and were forced to retreat.[2]

Sometime after Bruce's vision of an alternate future, he confided in his friend and guardian Alfred Pennyworth, about the creatures he'd seen within these nightmares. Alfred then went to work on creating a simulation system that would allow users to simulate stepping into the shoes of the potential team members that Bruce was looking to recruit to fight in this war against these creatures. As Bruce set about making use of the system, Alfred professed that he'd encountered trouble in creating an accurate simulation of the creatures and how they would react when challenged in combat.[3]

After the death of Superman at the hands of Doomsday , one of the Mother Boxes awoke and called to Steppenwolf, with many Parademons assisting Steppenwolf when he arrived at Themyscira to retrieve from the Amazons their heavily guarded Mother Box. After the New God retrieved the second Mother Box from Atlantis, the Parademons began kidnapping certain workers from S.T.A.R. Labs to learn of the last Mother Box of three's location.

At this point, a team of heroes intervened, saving the hostages and defeating several Parademons in the process. Steppenwolf built a hive inside a decommissioned nuclear silo in northern Russia, where his Parademons stayed relatively hidden, not attracting much attention from the world until the Unity could be started. Once the Unity process began, the heroes arrived to stop it, being initially overwhelmed by the Parademons' great numbers. Eventually, the League, with the help of the now recovered Superman, were able to stop the Unity and slay Steppenwolf, with all remaining Parademons presumably being dispatched along with their master.[2]

"I had a dream; it was the end of the world."
―Bruce Wayne to Diana Prince about his vision.[src]

In a nightmarish vision of an alternate future shown to Batman as a warning from a version of the Flash from that future, parademons invaded Earth, having seemingly allied themselves with a ruthless and tyrannical version of Superman and his Regime Stormtroopers.[4][2] Several parademons began taking much of the last remaining Insurgency members away to a place unknown. One parademon managed to knock out Batman after the latter had successfully killed a Regime trooper, taking out the Dark Knight in a single strike.[4]

Parademons lack personality and individuality while possessing an instinctive combat ability upon creation. They are loyal soldiers to their New Gods masters, especially Darkseid, as they operate proudly under his banner, as seen when Steppenwolf commands an army of them in his attempted terraformation of Earth, and during his second attempt.[1] During Bruce Wayne's vision of an apocalyptic future, parademons were loyal also to the tyrannical Superman.[4]

Parademons also have improved physical abilities, since they are seen carrying people with ease and have been shown to be capable of overpowering Atlanteans even underwater, where they are said to be at their strongest, and dragging them to the surface, and a single parademon was able to knock down Wonder Woman after she had previously been hit by Steppenwolf, though she had been caught off guard at the time. They also possess other skills such as superhuman agility and speed. They also have two wings that allow them to fly at high speeds.

Parademons also possess innate abilities for hand-to-hand combat and the handling of different weapons. However, they aren't actually capable of standing up to immensely skilled and strong beings, as not only was Aquaman shown able to defeat hordes of them effortlessly, but even Batman, who was only at the highest level of human physical prowess, was able to dispatch scores of Parademons with the Batmobile's weaponry and even go head to head against them with martial arts and his equipment and come out as the victor. Well over 5000 years ago, parademons, while formidable foes nonetheless, were noticeably weaker than those of the current age, as many were defeated by the hands of ordinary humans, who were physically inferior to Amazons and Atlantians, using rudimentary weaponry, suggesting that the process of creating parademons has been changed and improved upon.

Some parademons posses the unique trait of extending an extra pair of insect-like pincers from their abdomen, used to pierce their targets, along with two sets of wings they use when flying, and have slimmer arms and legs. These parademons are considerable larger and seem to have a different head shape compared to normal parademon troopers. They are seen during the Knightmare and are present in Steppenwolf's base. 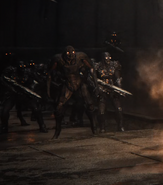 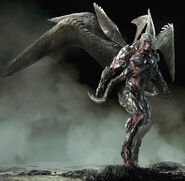 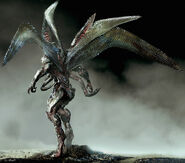 "Steppenwolf has backup, called parademons. He can summon them. They're his army, basically shock troops. There are a lot of them; their power is in numbers. They're winged and can fly in very quickly and do damage with their custom weapons."
―Ciarán Hinds[src]

Concerning their design, Jeremy Hanna, a concept artist for Batman v Superman: Dawn of Justice, said "We worked with Zack Snyder back in 2015 to develop a look for the parademons which feature in the dream sequence in Batman v Superman: Dawn of Justice. We wanted to blur the line between organic and technological forms, making it difficult to distinguish the creature from their armor, breather, and weaponry."[5]