"Long ago, when the world was new and all of history was still a dream, the Gods ruled the Earth, Zeus king among them."
―Hippolyta[src]

The Olympians, also known as the Old Gods or the Greek Gods, were an extra-dimensional race of beings who were worshiped as gods by the Ancient Greek and Amazonian civilizations. The Olympians were slain during the War of the Gods by Ares, who was later killed during the last days of World War I by Wonder Woman, Zeus' daughter with Hippolyta.

Due to their demise millennia ago, the Olympians are no longer worshiped by humanity, and, in modern times, most humans incorrectly consider them to be nothing but an old myth. Yet some of their powers still continue influencing events on Earth, carried by those who guard the Rock of Eternity and follow the legacy and teachings of the Wizard Shazam.

"Zeus created beings over which the Gods would rule. Beings born in his image, fair and good, strong and passionate. He called his creation "Man"."
―Hippolyta[src]Millennia ago, Zeus created humans in his image, beings Hippolyta described as peaceful, passionate, and inherently good until Ares, son of Zeus, grew to envy his father's creations and poisoned their hearts with jealousy and suspicion. Soon after Ares's manipulations, humanity began to war with one another across the Earth until the gods created the Amazons to spread love and compassion among humanity, restoring peace to the Earth yet again.[2]

At some point before the Invasion of Earth the Olympians fought in a conflict against the race of Titans. It lasted for ten years and it was won by the Gods.[1]

Centuries later, General Steppenwolf of Apokolips invaded Earth. Steppenwolf's arrival incited an alliance of Earth's forces. From Mount Olympus descended Zeus, Ares, and Artemis to aid in the battle that ensued, followed by the arrival of Earth's Green Lantern, Yalan Gur. Together with his children, Zeus helped to defeat a number of Steppenwolf's forces, fighting alongside Ares while Artemis destroyed their starships.

As the battle neared its end, Zeus smote Steppenwolf with a powerful blast of lightning, inciting the invaders to retrieve their commander, much to his chagrin, while Zeus interrupted the Apokoliptian Priests' ritual of combining the three Mother Boxes to form the Unity and terraforming the planet.

In the aftermath of the battle, Zeus entrusted the Mother Boxes to the Amazons, Atlanteans, and humans for safekeeping before he and his children ascended to Mount Olympus once again.[3]

The city of Atlantis and the Atlantean culture were heavily influenced by the Olympians.[4] Poseidonis, one of the two cities that forms Atlantis, was named after the god Poseidon.[5]

War of the Gods

"When Zeus led the gods to our defense, Ares killed them all, one by one, until only Zeus himself remained."
―Antiope[src]Ultimately, the peace brought upon by the Amazons did not last forever, and the Amazons became enslaved by humanity, until Hippolyta led the Amazons in a revolt against their captors. When Zeus led the gods in the Amazons' defense, Ares killed them one after another until only Zeus remained. With the last of his power, Zeus smote Ares with such power that the god of war had no choice but to flee to Earth in a weakened state.

Anticipating his son would eventually return to complete his mission, Zeus bestowed upon the Amazons a weapon powerful enough to kill a god. With the last of his power, Zeus created the island of Themyscira for the Amazons, protected from Ares and the outside world.[2]

Ares, exiled from his home, had spent his years among the humans influencing violence among their ranks. In the midst of World War I, General Erich Ludendorff and Doctor Isabel Maru were the latest of Ares' pawns, manipulated throughout the events proceeding the conflict to ensure that it would be a "war to end all wars."

Disguised as Sir Patrick Morgan, a member of the British War Council, Ares lead Diana and the Wonder Men to Belgium, where the war was more grim, as a means to convince her that humanity was truly corrupted and unworthy of the Earth. As the war reached its end, Ares revealed that the God Killer is no mere weapon, but Diana herself, instructing her that only a god could slay another god.

After failing convince Diana to join him, Ares decided to finally destroy her, and a fierce battle erupted on the airfield where German bombers were preparing their payloads. As the battle between the two continued, Diana, driven by her grief over Steve Trevor's sacrifice, overcame her self-doubt and used her power to smite Ares, the last of the Olympians.[2][1]

"So, you have the blood of the Old Gods in you... The Old Gods died."
―Steppenwolf to Wonder Woman[src]The Olympians had a significant impact on the early civilizations of humanity, as they appeared in their calendars and are honored in astronomy, notably in the form of their Roman counterparts. Aside from relatively few practicing Hellenic pagans, humans no longer worship the Olympian Gods, due to the majority of humanity considering the gods to be nothing more than a myth. The Olympians and their memory are nonetheless still consistently worshiped and honored by the Amazons of Themyscira, to the point that some would be named after goddesses in honor.[2][1]

Some, such as Lex Luthor, would still dedicate themselves to the study of Greco-Roman myths, and become mythologists. Lex, however, held a very negative view of Zeus in particular, and correctly deduced that many of the myths were inaccurate and based on the metahumans of old.[6]

The only known living demigod descendant of the Olympians is Diana, now known to the world as the superheroine Wonder Woman.[2][1]

After a long and mostly fruitless search, the Wizard Shazam finally found a worthy champion to bestow his power upon. Calling upon the energies of the Rock of Eternity, said to be the source of all magic, he bestowed the power of Zeus, the courage of Athena and the speed of Mercury as well as other powerful aspects associated with the Olympians such as the strength of Hercules and the stamina of Atlas upon the young boy by the name of Billy Batson. Shortly afterwards, the Wizard perished. Billy honored the Wizard's legacy by sharing the power to five other worthy individuals, leaving only one throne within the Rock of Eternity vacant. [7]

Olympians bear a similar outward appearance to that of humans, due to humanity having been created by Zeus in his image. However, they are much more massive than humans and other species, equal to the stature of a New God like Steppenwolf, as seen during the latter's Invasion of Earth.

Notably, they wielded unparalleled divine supernatural power, thereby surpassing super-powered Kryptonians or New Gods. They are able to summon immeasurably powerful bolts of energy capable of destroying Apokoliptian battleships with ease. As revealed by Ares, only a god (or a demigod child of one) had the power to kill another god. The Olympians could also travel between dimensions using their power.

Despite their aforementioned physical likeness to human beings or Kryptonians, the Olympians were otherwise very different, as they possessed unrivaled physical attributes, as well as were unaffected by the passage of time or illness. 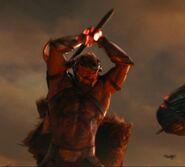 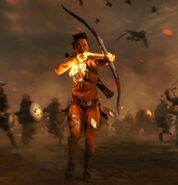 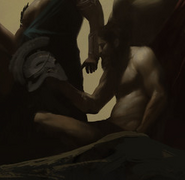 Hades †
Add a photo to this gallery

Diana (half-Amazon)
Add a photo to this gallery

Zeus strikes down Ares
Add a photo to this gallery

Retrieved from "https://dcextendeduniverse.fandom.com/wiki/Olympians?oldid=166775"
Community content is available under CC-BY-SA unless otherwise noted.