Justice League: The Art of the Film

"That Kryptonian's death plunged this timid world... into such terror. Amazons. Atlanteans, each stands and falls alone. I know Mother. You've waited too long for the Unity. I know. But you will feed. And my exile will come to an end. I will take my place among the New Gods."
―Steppenwolf[src]

The New Gods are a spacefaring race of humanoid beings that are practically immortal, possess phenomenal physical might, and are native to the planet Apokolips.

During their "Great Age of Expansion", the Kryptonians would come across the New Gods of Apokolips, though their encounter would end with the two races becoming enemies.[1]

Thousands of years ago, General Steppenwolf invaded planet Earth in Sector 2814 in an attempt to terraform the planet into an Apokolips-like planet, and he would've succeeded if not for the intervention of the Olympians, Amazons, Atlanteans, aided by the Sector's Green Lantern, Yalan Gur. After suffering a heavy blow from Zeus himself, Steppenwolf was forced to retreat, dragged away from the planet by his Parademons and the Apokoliptian Priests, losing three Mother Boxes in the process. His defeat resulted in his exile from his homeworld of Apokolips.[1]

In 2015, Bruce Wayne had a vision of a possible future where Superman joined the New Gods and caused an injustice war. This vision had Parademons in it as well.[2]

Shortly before being arrested, Lex Luthor had a communication with Steppenwolf, where he revealed that Superman was dead and Earth was without protectors.[2]

Steppenwolf arrived on Earth once again to reclaim the three Mother Boxes and terraform the Earth once again. He faced resistance from the Amazons and Atlanteans, but easily overpowered them and reclaimed the Mother Boxes. However, before he could complete the Unity, he was confronted and stopped by the newly formed Justice League and a revived Superman.[1]

The New Gods are an advanced warrior race with access to technology beyond human understanding. They possess advanced energy weapons such as the plasma carbine or Electro Axe of Steppenwolf. However, one of its most predominant objects are the Mother Boxes, high-tech objects that allow them to open portals, known as Boom Tubes, to other places in the universe. They can also be used to repair a damaged body; Victor Stone was transformed into a cyborg by a Mother Box, replacing his damaged and missing body parts with cybernetic ones.

The New Gods are much more powerful beings than humans and many other species in the universe. However, they are matched or surpassed by Kryptonians powered by solar energy or Olympian Gods. They possess superhuman physical abilities, although it varies; while Steppenwolf possesses enough physical might to dominate such powerful beings as Wonder Woman and Aquaman, the Apokoliptian Priests were not as powerful as Steppenwolf. Despite their large size, the New Gods have incredible superhuman speed and agility that allows them to easily overcome and overwhelm other smaller and agile beings. They can also react quickly to high-speed projectiles. The New Gods are invulnerable to many forms of damage; Steppenwolf was even able to withstand the tremendous blows of demigods like Wonder Woman or solar-empowered Kryptonians like Superman. In addition, they are immortal beings and live forever.

So far, only Steppenwolf and the Apokoliptian Priests were seen, making it unclear what a normal New God looks like and what physical traits they share with them, as even though both are high-ranking New Gods, the Priests are still rather different from Steppenwolf, being not as large as he is.

It has been shown that the New Gods are able to control their Parademon minions with absolute authority in a manner similar to mind control. However, since the Parademons feed on fear, they will turn against their masters if they expose a sufficient amount of fear.[1] 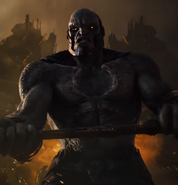 Heggra
Add a photo to this gallery

Retrieved from "https://dcextendeduniverse.fandom.com/wiki/New_Gods?oldid=169082"
Community content is available under CC-BY-SA unless otherwise noted.