watch 01:28
'DC Extended Universe' Profile: Nereus
Do you like this video?

"Violence has always plagued the surface. They will destroy themselves."
―Nereus[src]

Nereus is the king of the underwater kingdom of Xebel and the father of Mera. He joined King Orm in his plan to unite the kingdoms of Atlantis during the War for Atlantis and also helped him try to take over the surface world. After Aquaman retrieved the Trident of Atlan and defeated Orm, Nereus gave up the plan and the Kingdom of Xebel reunited with Atlantis after the war.

King Nereus is the leader of Xebel, one of the 7 successor kingdoms of the original Atlantean Empire.[1] Like his Atlantis counterpart, King Orm, he has a significant distaste of the surface world and its people.[2] At some point he had a daughter with his wife and, when he went to war, his daughter Mera was taken in by Queen Atlanna of Atlantis.[3]

During a clandestine meeting at the Council of Kings, Nereus tensely greeted Orm and derided him for choosing a location too close to the surface, which Orm countered with an impassioned speech of past glories and surface threats, which Nereus rebuffed as he believed the surface will destroy themselves before long and remained unconvinced by Orm's statements of Atlantis being destroyed first.

Although Vulko offered him a chance to unite the Atlantean Empire by reminding him that Xebel was honored as the first Kingdom to join the alliance, Nereus bluntly revealed he knew full well the truth of the meeting, as Atlantis didn't actually have any other choice but to ally with Xebel first due to the ancient laws that stated only with at least four kingdoms can any Atlantean kingdom launch an attack on the surface. Xebel was the only kingdom able to give Orm the military strength needed to force the kingdoms of the cowardly Fishermen and stubborn Brine (which would otherwise never agree to join Orm) to support the attack. The Lost Nation and the Deserters having long perished, they weren't options. Without Nereus and his army, Orm's request for an alliance were but a 'stillborn' proposition.

He then coldly told Orm he knew what he really wanted: to be declared "Ocean Master" by having the allegiance of at least four kingdoms, which would allow him to command the greatest military force on the planet. He dismissed Orm's claims that is was a mere title. When Orm impatiently said that he is the natural choice to lead it, Nereus sarcastically reminded him of the existence of his half-Atlantean, but still of royal blood brother and even stated that as he is not the first-born, Orm's claim to the throne of Atlantis was weak, and therefore he was unworthy of uniting the empire. Orm angrily responded by dismissing his half-brother as loyal to the surface.

The discourse was violently ended when a commandeered Russian attack submarine launched torpedoes at the Council of Kings. Taken by surprise, Nereus and Orm attempted to counterattack but were stunned by another exploding torpedo. Trapped under debris, Nereus was saved by Orm who then swam to the submarine and destroyed it. Finally convinced of the surface threat, Nereus pledged his forces to Orm's cause.

When Orm and Arthur prepared to duel, Nereus and Mera tensely talked about Nereus actually wanting the war to occur. After Mera openly betrayed Orm and was declared to have died, Nereus was relieved to hear she was still alive and sternly warned Orm that if any harm fell upon Mera, he would break off their alliance as Mera is still his daughter and the heir of Xebel.

Nereus stopped Orm from killing the Brine King, believing that they could use him to secure an alliance with the Kingdom of the Brine, but the Brine King defied Orm. They were interrupted by the emergence of Karathen, Mera and Aquaman. Although Nereus continued to lead his army, when Mera fought several Xebel soldiers, Nereus immediately ordered his army to stop attacking his daughter and Mera told him that Aquaman was the new king of Atlantis as he had the Trident of Atlan. Deciding to believe his daughter, Nereus had all Xebellians stop fighting and allow Orm and Arthur to finish their duel one-on-one. After the war, the Kingdom of Xebel was among the many kingdoms that reunited with Atlantis.[2]

Nereus, as well-fitting of the King of Xebel, who has fought in many wars in the ocean, is evidently brave, as he willingly stood against the Kingdom of the Brine when he fought them. His experiences leading Xebel also has granted him a good deal of intelligence and sharp perception capable of seeing through lies on first sight, with full social confidence, allowing him to openly be blunt and conscending even towards someone of Orm's level of intelligence and patience and remain undeceived and unmoved by his appealing pleas, as having fully known of the ancient laws of the Atlanteans that only by having four kingdoms united can the Atlanteans attack the surface, from the beginning he had knew Orm's true intentions for inviting him first was because he was the only one capable of providing Orm the forces he needed to make the other kingdoms join him with the only remaining kingdoms being either hostile or absolutely unwilling to join him, henceforth coldly flaunting the knowledge in Orm and Vulko's face to make it clear he was entirely undeceived by their attempts to appease him by reminding him Xebel was the first choice of Orm, and easily saw through Orm's claim that he saw the title of Ocean Master as merely being a name, seeing right through him and deducing Orm's desire for the title of the Ocean Master was because he would be able to lead all the Seven Kingdoms as the greatest military might on the planet, even going as far as to semi-successfully provoke Orm by reminding him of how he may be the King of Atlantis, but he is not the first-born and therefore his claim on the throne is weak, which he believes to make him unable to lead all the Kingdoms. Even Orm appeared to know better than to think he could outtalk Nereus straightly despite having Vulko by his side, having chosen to have pirates attack the Council of Kings to convince him to join him.

Nereus, however, does have a good side to him. He truly cares for his kingdom, wanting what is best for it. Although being the king of Xebel clearly shows he is fully capable of killing his opponents, as he has most likely killed directly several during the wars he fought in, if possible, it is shown he doesn't desire wars but clearly would not hesitate to fight when needed, and would resort to diplomacy first, even towards the humans who he disliked, as he quickly refused Orm's proposal of working together to kill all humans, preferring that they destroy themselves or find a peaceful solution, and kept this attitude even as Orm persisted, refraining from physical violence towards Orm even as he insisted, and only with the humans attacking him did he agree. Indeed, in stark contrast to the outright ruthless and arrogant demeanor Orm showed even towards other Atlanteans, Nereus never showed any such behavior, as he was respectful around King Ricou even though he earlier on called him a coward and was clearly uncomfortable when Orm challenged and ruthlessly killed King Ricou, looking hesitant and a bit remorseful over having to threaten the latter's wife and daughter and when Orm had defeated the Brine King, Nereus tried to make Orm spare him. Although Mera's assumption that Nereus would not hesitate to sacrifice her to the Trench and would not take her back and how Atlanna took in Nereus indicated they didn't have the best relationship, Nereus loves his daughter Mera dearly. He tried his best to convince her to join him, treating her well even when she spoke against it and looking sad as she coldly rejected him, and even after she betrayed him, Nereus adamantly defended her from Orm's wrath, even making it clear he would stop cooperating with him if he dared to not return Mera to him safely, being outright relieved when she turned out to have survived, showing although Mera had a level of bitterness towards Nereus, he never hated or resented her and always considered her as his daughter and the heir of Xebel. When she came into conflict with Xebel soldiers, Nereus unhesistantly ordered them to let her pass unharmed. His soft side for his daughter even made him concede rather easily to Mera's plead that he stop aiding Orm as Arthur has proven to be king by the most sacred laws due to having the Trident of Atlantis. Notably, Nereus does not seem to at all harbor any personal spite towards Arthur for being half-Atlantean, as he at least tolerated him enough to mockingly tell Orm Arthur could be a better king than he was and after he decided to stop fighting, when Arthur gained the upper hand over Orm, Nereus outright smirked and was willing to reunite Xebel with Atlantis when Arthur became King.

Atlantean physiology: As an Atlantean, Nereus is an extremely powerful being, especially when exposed to water.[2] 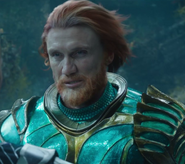 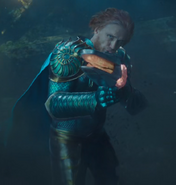 Retrieved from "https://dcextendeduniverse.fandom.com/wiki/Nereus?oldid=140377"
Community content is available under CC-BY-SA unless otherwise noted.