The multiverse is the term for a series of universes, timelines, and dimensions existing separately, yet alongside one another on a continuous stream.

Arrival of the Enchantress

In 4358 B.C., Enchantress and her brother Incubus appeared before the people of South America, in or near Peru. They used their otherworldly powers to rule over an expanse of humanity before their subjects eventually rebelled, somehow locking the beings away in the Tres Osos Caves. The pair are believed to have traveled between dimensions to arrive on the prime Earth from whatever universe they originally hailed.[1]

Invasion from "the dark place"

When Darkseid discovered the Anti-Life Equation, he orchestrated an invasion of Earth, but he was defeated and forced to retreat by a combined army of humans, Amazons, and Atlanteans, along with the involvement of Ares, Zeus, Artemis, and Yalan Gur, a member of the Green Lantern Corps.[2]

In November of 2015, the Flash appeared before Bruce Wayne in the batcave in a desperate attempt to change the future. This version of the Flash came from an apocalyptic future he hoped to avoid the second time around, and in so doing, he split the timeline. The apocalypse has yet to be avoided in the current timeline.[3]

Meeting of the Flashes

At some point, Barry Allen wound up in the Speed Force, accidentally coming across another version of himself from Earth-1 in the process. Barry mistook Earth-1 Barry for a cosplaying fan at first, even asking him for a selfie, but soon realized he'd traveled between worlds and that the other Flash was an alternate version of himself. Earth-1 Barry thought their meeting could no longer be possible, but before he could explain the situation any further, Barry faded out while expressing his excitement, claiming that he told Victor Stone that a such a thing like the multiverse was possible. [4]

Earth-1 Barry mentioned his superhero name, the Flash, while introducing himself, which seemed to inspire Barry to consider the name for himself, a name that ARGUS had previously referred to him as in their files. [5]

In an universe where Wonderous Serena operates as superhero, the retrobots somehow managed to create a portal capable of traveling between alternate realities, traveling to the prime universe where Serena Williams was playing a tennis match. The Retrobots then interrupted the game, arresting Darius along with creating fear among the spectators. Serena Williams managed to defend herself by using her racket and helping the spectators who needed help, during the battle, Williams met Wonderous Serena upon seeing the portal, and they accidentally touch it, causing Serena Williams to travel to her reality.[6]

Within the reality of the Retrobots, they kidnapped the parents of a girl named Mikayla Johnson, causing that she started running scared until she met the Serena Williams. Williams helped her to find her parents while they confronted some Retrobots, however Serena decided to left Johnson at an orphanage with Kym while she continues the search.[6]

Williams set out to find the Diana Prince of that reality after assuming she was a tennis player. Upon arriving the stadium where Diana Prince was, she was being attacked by some Retrobots, so Serena helped her destroying a bot. When they met face to face, they introduced themselves when Serena asked about Wonder Woman. In that moment, some spectators began to be attacked, so Prince and Williams prepared to defend them.[6]

Meanwhile on the Prime Earth, Wonderous Serena would land in the stadium where Serena Williams was, watching how Wonder Woman arrived trying to stop the retrobots. Wonderous decided to help Wonder Woman to defeat them, explaining her the intentions of the retrobots, so they would dedicate themselves to trying to destroy them in order to cross the portal that would take them back to the world of Wonderous Serena.[6]

Then they were cornered when a long amount of retrobots started to arrive from the portal, so they would decide to infiltrate the S.T.A.R. Laboratory in search of plans that would help them build a multiversal portal to travel to the Wonderous' universe, trying to prevent the retrobots that supervised the place from seeing them. Diana and Serena would manage to enter finding some information, however a retrobot would approach so Wonder Woman would stop it, this defeated retrobot would launch a shot that Wonderous Serena dodged, but causing it to fall near them exploding.[6] 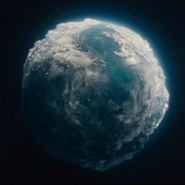