LexCorp Industries, or simply LexCorp, is a company that was founded by ruthless financial genius Alexander Luthor Sr., who ran it since its inception for over two decades, up until his death in 2000, in which the company was inherited by his even greater genius son, Lex Luthor, who officially assumed the position of CEO shortly after turning 16.

Under the younger Luthor's control, LexCorp became the world's premiere company in high-technology defense innovation, flourishing financially for nearly two decades, up until the exposure of Lex's criminal activities by Lois Lane, resulting in his subsequent deposition and incarceration. As a result, the company distanced themselves from Luthor while also announcing a temporary halt to global operations.

LexCorp Industries started in the petrochemical and heavy machinery business upon being founded by East German immigrant Alexander Luthor Sr.[2] in the 1960's.[3] It is said that he accomplished this feat through sheer grit and ferocity, having the motto "offense wins games", thereby earning himself an immense fortune and becoming a rags-to-riches millionaire. Indeed, some would claim that referring to Luthor Sr. as a “good businessman” is not unlike calling Napoleon Bonaparte a “competent conqueror.” While the company was in fact named after Alexander himself, the elder Luthor would claim at investor pitches to have named LexCorp after his son Lex. In truth, the company was actually named LexCorp around 1974, ten years before Lex was even born.[2]Years later, Lex would muse at how wealthy old women found "[writing] checks for Lex" adorable.

As Luthor's business expanded, he was portrayed to fresh, youthful investors that he was an adoring father building a legacy for his son. They responded fondly, which he used to his advantage.

However, in the year 2000, Luthor Sr. passed away unexpectedly, leaving LexCorp Industries to his son Lex Luthor. The latter would turn out to be a mastermind and a supergenius businessman, who successfully transformed LexCorp from an aging petrochemical and heavy machinery company into a cutting-edge Fortune 500 technology giant (in a stupendous, what some called a superhuman business feat),[2] and considerably expanded the already massive wealth inherited by him from his father to phenomenal levels that made him quite possibly the wealthiest man in the world, to the point where he easily rivals, if not, surpasses, even the likes of Batman). Along with that, Lexcorp also far surpassed Bruce's company Wayne Enterprises, (along with Kord Industries, Stagg Industries, Queen Industries, and Geschäft-Krieg) in terms of R&D budget and in the field of military defense contracts, which made Lexcorp the world's premiere company in high-technology defense innovation. In fact, the genius business achievements of his father Alexander Luthor Sr. (which were very considerable in their own right) pale in comparison to the astonishingly prolific accomplishments of the younger Luthor, who became the youngest person ever to be named Fortune's Businessperson of the Year and included in Fortune's list of the World's 50 Greatest Leaders. LexCorp would also grow to be one of the top 3 charitable corporations in America, alongside Wayne Enterprises and Kord Industries.[2]

During their final battle in Metropolis, General Zod pushed a LexCorp hauler truck towards Superman, which Superman easily avoided. A short while later, their fight caused the destruction of the then-being built LexCorp building.[4] Following the aftermath of the Black Zero Event in Metropolis, LexCorp financially supported reconstruction efforts in the city in part to CEO Lex Luthor's philanthropic efforts. LexCorp became one of the few companies who stayed in Metropolis after a wave of companies abandoned the city, with local politicians and media personalities calling those who left traitors. Inspired by Lex Luthor's philanthropy, several companies in the city, such as Kord Industries, chose to stay, or to reverse their retreats, and some companies who had never been there before even decided to relocate to Metropolis.[5]

At some point following the event, LexCorp created artistic renderings of the Kryptonian ships which were shown in a documentary made about the subject of Kryptonian technology.[6]

After Lois Lane of the Daily Planet revealed the illegal arms trafficking of Kryptonian weapons on behalf of CEO Mark Hanford, LexCorp acquired his company Hanford Technologies and all of its assets, with Lex Luthor citing that the employees should not suffer under the immoral actions of its former CEO.[7]

At some point Lex Luthor is visited at LexCorp Industries by senators Finch and Barrows, and he proposes to them the idea of using the recently acquired kryptonite xenomineral as an official "silver bullet" deterrent against Superman, to hold him in check if the alien superhero were to ever decide to turn against humanity. In order to forge such a "silver bullet", Lex requests Finch to grant him an import license for the large piece of kryptonite (nicknamed "Emerald City" by Lex) lying in the Indian Ocean (at the wreckage of General Dru-Zod's World Engine). Finch leaves, considering the request, while Barrows stays, clearly intrigued by Lex, and intent to continue a discussion.

Lex quickly manages to persuade the good-natured senator Barrows to grant him access to the Fortress of Solitude, and to the corpse of General Zod. Lex rewards the cooperative politician with the cherry-flavored Jolly Ranchers, and is quick to exploit his new access - taking a good look around the Fortress, and subtly peeling off the fingerprints from General Dru-Zod's corpse (with a kryptonite-bladed scalpel).

Induced by the red notes and recent events of the US Capitol Bombing to finally take offensive action against Superman, Batman breaks into the well-guarded LexCorp Industries building, successfully steals the kryptonite from within, while seriously injuring all of the guards (swooping down on them from above, like an actual bat) despite their tireless attempts to shoot him (evidenced by the numerous cartridges lying on the floor in the aftermath), leaving a batarang in the empty kryptonite container (for Lex to see), as well as a considerable trail of destruction.

Following Superman's death and Lex Luthor's exposure by Lois Lane as the main criminal culprit behind the numerous unspeakable crimes against peace and humanity, Lex was deposed as CEO of LexCorp Industries and incarcerated at Belle Reve, then later Arkham Asylum.

LexCorp then released an official announcement distancing themselves from him and his actions. The company further stated that global operations would be suspended temporarily. Included in the announcement was a cryptic message from Luthor about the potential future.[10][11]

In a possible future, LexCorp's equipment was known to have been used by members of the Regime to trick and entrap the Insurgency movement led by Batman.

A LexCorp truck in Smallville

A LexCorp tank in Metropolis

Lex Luthor on the basketball court of the LexCorp Research Park 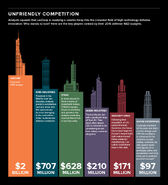 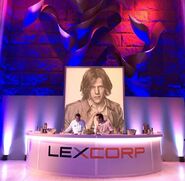