Krypton, known to the Ko'erst as Lorviia,[3] was a planet in the Rao system, orbiting a red star known as Rao. It was the home world of the Kryptonians before the planet was destroyed in a seismic implosion from careless mining of the planet's core. Nearly all Kryptonians were killed in the implosion, except for Kal-El, Dru-Zod, and the Sword of Rao.[4]

Prior to the implosion, Krypton endured the Kryptonian Civil War which resulted in the death of its foremost scientist Jor-El and the incarceration of General Zod and his Sword of Rao.

Krypton formed over 8.7 billion years ago in the Rao star system, and the development of cellular life led to the creation and evolution of the Kryptonians.[1]

Their culture began exploring other galaxies 18,000 years ago and even set up colonial outposts on other planets. However, the Kryptonians abandoned their colonies and began genetic cultivation, artificially engineering newborns for pre-determined roles in society. As a result, the planet's resources became exhausted.[4]

"Krypton itself soon followed. Vast tectonic plates buckled, venting mountainous sheets of glowing ejecta into the upper atmosphere and beyond. Continents crumbled and seas boiled over, as the planet’s contaminated core built to a critical mass. A series of global detonations overcame the tremendous gravity that held the planet together. And then Krypton blew apart in a final, apocalyptic paroxysm that could be seen from light-years away. Doomsday had come."
―Krypton is destroyed[src]

Krypton was doomed to destruction as a result of its inhabitants' careless mining of the planet's core, accelerating a forthcoming seismic implosion. Jor-El attempted to warn the governing council of their mistake, but at the same time, General Dru-Zod attempted a coup d'état, starting the Kryptonian Civil War. Jor-El used the distraction to infuse the Growth Codex of Krypton into the cells of his son, in hopes of preserving the Kryptonian race, before sending his son to Earth. Enraged, Zod killed Jor-El, but was arrested by the Sapphire Guards shortly thereafter.[4]

Krypton is portrayed as having had an Earth-like terrain composed of canyons and oceans. Its gravity was much greater than that of Earth, and its atmospheric composition differed to the extent of being unsuitable for humans. Krypton featured many cities that were towering metropolitan areas surrounded by walls and towers.[4]

The planet was tidally locked to its star, creating a limited sweet spot where life could form while the rest of the planet was forever untouched by the light of Rao. This means the Kryptonians didn't have a night cycle, as Rao was always in the same place in the sky.[5]

The wildlife included the great Rondor, considered the king of the wild. Another notorious species were Kryptonian War Kites,[4] genetically created through the mixing of many Krypton species, including an extinct marine creature. By the time of the Kryptonian Civil War, only domesticated life forms remained on Krypton.[6]

Faora-Ul is known as "Tigress of Zod", thus indicating that Krypton is inhabited by tiger-like creatures.[6] Krypton also had Earth-like lizards, insects, snakes[7] and birds,[4] such as the Blood morals.[8]

The planet is orbited by four moons, including the destroyed Wegthor.[1] 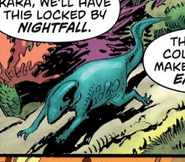 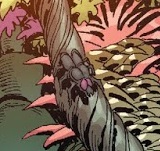