The Ko'erst are a species of creatures that attempted to invade Earth.

After scientists from Earth began opening tachyon portals, the Ko'erst began telepathically controlling a Terran, Forsythe, messaging his cortex with instructions on how to connect a portal to their world. They eventually came through, with plans to terraform the planet, to act as an outpost. However, they were soon stopped by the superhero Superman, despite their energy attacks. They were planned to be kept in separate containment, before repairing the tachyon console and sending them back to their planet.[1] 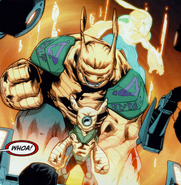 Retrieved from "https://dcextendeduniverse.fandom.com/wiki/Ko%27erst?oldid=125197"
Community content is available under CC-BY-SA unless otherwise noted.