Tatsu Yamashiro (née Hikari)[1] is a Japanese samurai assassin code-named Katana (after her weapon of choice). Tatsu is an infamous master of swordplay and martial arts, trained to the highest level in the ancient art form. She is a proxy member of the Suicide Squad, and, of note, the only voluntary member as Rick Flag's personal bodyguard.

Tatsu Hikari was born on March 16, 1986, in Tokyo, Japan, and trained in various martial arts at a young age, a trait encouraged by her parents. When she reached adulthood, two brothers began to compete for her heart: Maseo and Takeo Yamashiro, yet her decision to marry the former drove the latter into joining the Yakuza and be disowned by his family.[1]

After the deaths of Tatsu's parents, she and Maseo started a family of their own, and she gave birth to twin girls, Yuki and Reiko. Meanwhile, Takeo rose in the Yakuza's rank, and one of his exotic tastes included ancient weapons. He was presented with a pair of matched swords, one of which Takeo favored due to its mystical properties, which would come to be known as the Soultaker because of its ability to trap the souls of its victims within itself.

The young Yakuza accociate spent days preparing himself before taking both swords to the Yamashiro residence, demanding his brother duel for the "prize" of Tatsu. During the course of the struggle, a fire was started and, while Maseo was distracted by his children, Takeo killed him with the Soultaker. Tatsu arose just in time to see her husband die, and fiercely engaged Takeo, gaining the upper hand and disarming him. Attempting to save her children, she heard her husband's voice coming from the mystical sword telling her they were already lost.

Thus, Tatsu instead escaped alone with her life and began training as a samurai under a master called Tadashi. After much time, she graduated from his tutorship and left for America, where she intended to use her talents to fight for justice. Tatsu took the code-name "Katana" after the sword that she still wielded, tearfully speaking to the soul of Maseo within it from time to time. The Japanese script on her pants translates to, "I weep when I think of him," as a reference to Maseo himself.[3]

"Love your perfume. What is that; the stench of death?"
―Harley attempts to converse with the stoic Katana[src]

Katana arrived outside Midway City where she was the last member of the Suicide Squad to arrive and got aboard the helicopter transporting the squad mere seconds before taking off. She's introduced to the squad by Rick Flag and Harley Quinn jokingly said hi to her and introduced herself to Katana which caused her to ask Flag if she should kill them. She was told to stand down and did so.

The helicopter transporting the Task Force X members soon arrived in Midway City but was quickly shot down by one of the Enchantress' minions, and so the helicopter crashed. Another helicopter carrying ARGUS soldiers managed to land safely and the ARGUS troops were deployed to make sure the squad members survived. They did, and walked out unharmed, Katana included.

Katana had walked with the rest of the squad and their ARGUS troops support through the war-torn ruins of the city to locate and terminate the Enchantress and her brother Incubus. During that time, Captain Boomerang told Slipknot that the nano-bombs were fake and were just a scare tactic. Slipknot believed him and the two soon plotted and launched their escape. Katana stopped George, but Slipknot was getting away until Rick Flag activated his bomb, effectively killing him in an instant. This revealed the bombs to be real and prevented any future escape attempts by the team members.[3]

Katana soon came across a group of soldiers who were infected and turned into warriors for the Enchantress. Amanda Waller had ordered them to pull out and continue, but they were spotted and thus engaged them. Katana used her Soultaker sword and killed numerous infected soldiers, and the battle soon came to an end after Deadshot showed off his impressive shooting skills and managed to kill all the remaining soldiers charging at them.[3]

After their first battle, Katana and the others headed towards the John F. Ostrander Federal Building where their target was located. The squad moved in and they soon had to rush to the top floor after Harley Quinn used the elevator and caused them to panic. Katana was there to greet Harley after her elevator stopped and she let her walk by after Harley made no attempt to fight them. They eventually battled more of the Enchantress' minions and had to form a defensive position around Rick Flag as he was being dragged away. After the battle dragged on, Deadshot had soon gotten sick of El Diablo not doing anything and riled him up, which caused El Diablo to burn down the remaining minions in a fit of rage.

Eventually, Katana and the others reached the top floor of the building where they found the safe house and location of their target. The target was revealed to be their boss, Amanda Waller, and she ordered a quick cleanup before leaving. After the drives were wiped clean and her FBI support was killed to eliminate witnesses, Waller arrived in front of the squad and mentioned how she'd still kill them so they couldn't kill her at that moment. She then walked away with Killer Croc saying he likes her and they followed behind her as well.

Katana and the others made it to the top of the roof where they awaited a helicopter to get them out. A helicopter was there, but something was up and the squad soon took cover as it was revealed that the Joker had hijacked it and began to fire on all of them. This was a distraction, as soon Harley's bomb was disabled and she managed to get on board and escape. Not wanting escaped convicts, however, Waller had the helicopter shot down, but both Joker and Harley survived.[3]

Soon after, the squad decided to drown their sorrows with a drink. They then decided to make a toast to honor among thieves. Katana, however, was offended by this, stating that she isn't a thief. After a conversation between Flag and Lawton, Katana and the rest of the squad left to battle the Enchantress.[3]

Katana is fiercely loyal to Rick Flag, working together with him as his body guard, and is thus the only willing Suicide Squad member. In addition, she is grievously devoted to her deceased husband Maseo Yamashiro, tearfully speaking to his spirit, which is allegedly encased inside her Soultaker sword. She is also seemingly void of humor (most likely due to the lingering grief over her husband and daughters' tragic deaths), and is known to be very serious and professional. As a warrior, Katana is ruthless and merciless to her opponents, especially towards criminals, meaning that she is more than willing to kill them, with Rick Flag using this ruthlessness of hers to keep the other Squad members in check. She is also almost completely fearless, as she faced the mighty Enchantress and Incubus without any hesitation.

"This is Katana. She's got my back. She can cut all of you in half with one sword stroke, just like mowing the lawn."
―Rick Flag to Task Force X[src]

"Her sword traps the souls of all its victims; I would not recomend getting killed by her"
―Rick Flag[src] 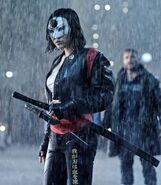 Retrieved from "https://dcextendeduniverse.fandom.com/wiki/Katana?oldid=130724"
Community content is available under CC-BY-SA unless otherwise noted.