Start a Wiki
watch 02:50
Justice League: Official Heroes Trailer
Do you like this video?

"There are heroes among us. Not to make us feel smaller, but to remind us of what makes us great."
―Lois Lane[src]

Justice League is a 2017 superhero film based on the DC Comics superhero team of the same name. The film is a sequel to Batman v Superman: Dawn of Justice. It is the fifth film in the DC Extended Universe. It was released theatrically on November 17, 2017.

A new version of the film featuring Snyder material that was scrapped from the theatrical release version and none of the Whedon material, Zack Snyder's Justice League, will be released on HBO Max in 2021.[1]

Fueled by his restored faith in humanity and inspired by Superman's selfless act, Bruce Wayne enlists the help of his newfound ally, Diana Prince, to face an even greater enemy. Together, Batman and Wonder Woman work quickly to find and recruit a team of metahumans to stand against this newly awakened threat. However, despite the formation of this unprecedented league of heroes - Batman, Wonder Woman, Aquaman, Cyborg and The Flash - it may already be too late to save the planet from an assault of catastrophic proportions.[2]

30,000 years ago, the Apokoliptian general Steppenwolf and his army of Parademons attempted to conquer and terraform Earth into his homeworld of Apokolips, through the combined energies of the Mother Boxes. However, Earth fought back, and their plans were foiled by a unified army that included the Olympian Gods, Amazons, Atlanteans, humans, and Green Lanterns. After repelling Steppenwolf's army, the Mother Boxes were separated and hidden in locations around the world.

In the present day, the world is in mourning following the death of Superman. Sensing humanity's fear, Steppenwolf and his Parademons succeeding in returning to planet Earth to resume their hunt for the Mother Boxes through the kidnapping of several employees of S.T.A.R. Labs, which is in possession of one of the Boxes. Having investigated the kidnappings and encountered a Parademon himself in Gotham City, the billionaire vigilante Bruce Wayne has decided to move forward in recruiting his planned team of metahumans as he believes an invasion is coming.

Steppenwolf manages to retrieve the Mother Box from Themyscira, prompting Queen Hippolyta to warn her daughter Diana Prince. Diana joins Wayne's group and informs him about Steppenwolf and the Mother Boxes. The two of them fail to persuade the Atlantean Arthur Curry and Victor Stone, but manage to recruit a young man named Barry Allen, who has the power to move in blinding velocities. Victor later joins the group after his father Silas is among those kidnapped, and Curry joins after encountering Steppenwolf while the latter's attacks Atlantis and succeeds in retrieving the second Mother Box.

The team receives intel from Commissioner James Gordon that the Parademons are traveling underground, and conclude that Steppenwolf's army is based in an abandoned facility. Although the group manages to rescue the kidnapped employees, the facility is flooded during combat, which traps the team until Curry rescues them, having decided to join them after Steppenwolf's second attack on Atlantis. Stone retrieves the last Mother Box from S.T.A.R. Labs for the group to analyze. Wayne decides to use the Mother Box to resurrect Superman not only to help them fight Steppenwolf's army, but also to restore hope in humanity. Diana and Curry are hesitant about the idea, but Wayne forms a secret contingency plan.

Clark Kent's body is exhumed and placed in the waters of the Kryptonian ship, and Allen provides a strong energy blast to activate the Box via his speed, causing to the resurrection of Superman. Superman flies over to Heroes Park and lands groggily, however, possesses few memories as the League arrives shortly. Superman is still confused and he attacks the group after Cyborg accidentally launches a projectile at him. A fight ensues while Wonder Woman, Aquaman and Cyborg attempt to restrain him but he overpowered them rather quickly. Flash tries to flank Superman, but he is able to see and match the former's speed, even landing a glancing hit. After overpowering Wonder Woman a second time, he attacks Batman. On the verge of being killed by Superman, Wayne enacts his contingency plan: Lois Lane. Superman manages to calm down and leaves with Lois to his family home where he reflects and tries to recover his memories. With the last Mother Box unguarded, Steppenwolf retrieves it with ease.

Without Superman to aid them, the remaining five heroes travel to a village in Russia where Steppenwolf plans to unite the boxes once again and reshape the world for his uncle and superior Darkseid who is the ruler of the planet Apokolips. The team fights their way through the Parademons to reach Steppenwolf during the ensuing, lengthy, destructive and harsh battle, although they are unable to distract him enough for Stone to separate the boxes. Superman decides to arrive and easily overpowers Steppenwolf, later assisting Allen in evacuating the city, even carrying a large apartment building full of civilians as well as Stone in separating the Mother Boxes. The United heroes manage to defeat Steppenwolf after a fight, who, overcome with fear, is attacked by his own Parademons before they are all beamed back to Apokolips.

In the aftermath of the battle, Wayne reacquires the Kent farm for Martha Kent and decides to rebuild Wayne Manor as a base of operations for the team and he and Diana agree that more heroes could join. Diana as Wonder Woman begins engaging more with the public. Allen manages to acquire a job in Central City's police department. Victor continues to explore and enhance his abilities with his father in S.T.A.R. Labs. Curry returns to Atlantis. Clark returns as a Daily Planet reporter and resumes his role as Superman, now dubbed the new team leader by Batman.

In a mid-credits scene, Flash and Superman decide to race to see who is the fastest person alive. In a post-credits scene, the megalomaniacal billionaire Lex Luthor has escaped from prison and recruits bounty hunter Slade Wilson to form a "league of [their] own".

Although Christopher Nolan was rumored to be directing Justice League,[3] Nolan himself ruled it out, but later was an executive producer on the film. In June 2012, Will Beall was hired to write the screenplay for a Justice League film, in which Batman, Superman and Wonder Woman would be the main characters.[4][5] Warner Bros. announced plans for the Justice League film to have a summer 2015 release date to compete with Avengers: Age of Ultron, though they had yet to complete a script or officially hire a director.[6]

Man of Steel director Zack Snyder stated, "I don't know how 'Justice League' is going to be handled. Honestly, I don't. But 'The Man of Steel' exists, and Superman is in it. I don’t know how you’d move forward without acknowledging that," during an interview with the New York Post in November 2012. He also claimed that Warner Bros. expects him to "keep them on course" as regards to their cinematic universe.[7] The Superman villains Brainiac and Doomsday were rumored to be possible antagonists.

It was announced in October 2014 that the film would be split into two parts, the first being released in 2017 and the second in 2019.[8] Producer Deborah Snyder confirmed the 2 Justice League movies are not two-part films. Zack Snyder says Justice League is most influenced by Jack Kirby's "New Gods".

The working title while filming was "Cavemen."

It was announced on May 22, 2017, that Joss Whedon would be stepping in to help oversee the completion of post-production and to direct the reshoots after Zack Snyder and Deborah Snyder stepped down to tend to a personal tragedy. As a result, many scenes have been left on the cutting room floor. A list of deleted scenes can be found here.[9]

Justice League
Add a photo to this gallery 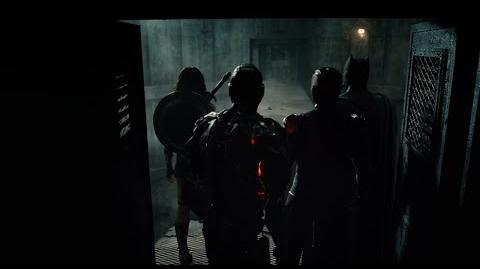 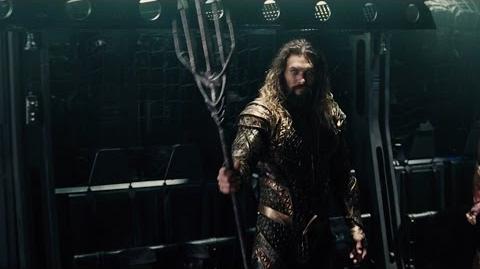 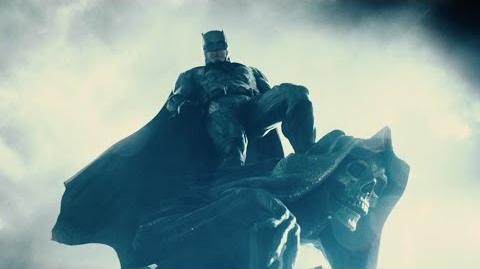 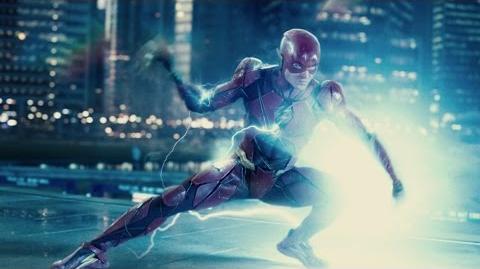 UNITE THE LEAGUE – THE FLASH 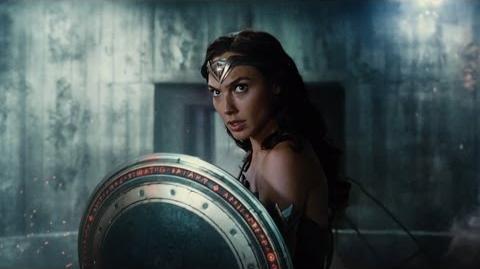 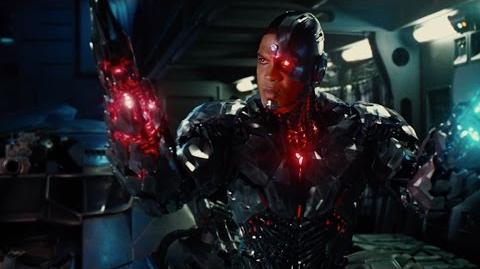 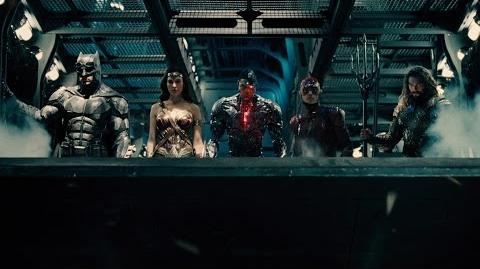 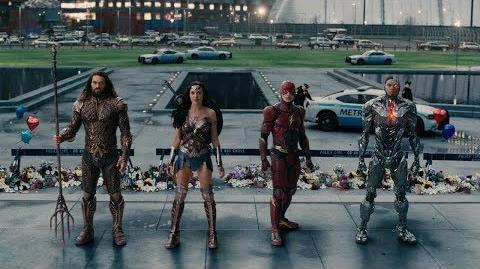 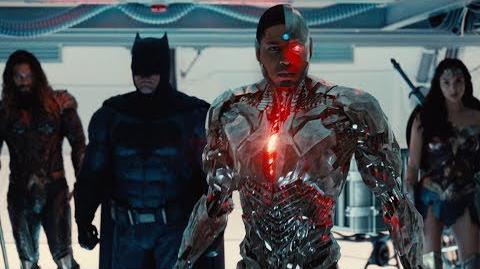 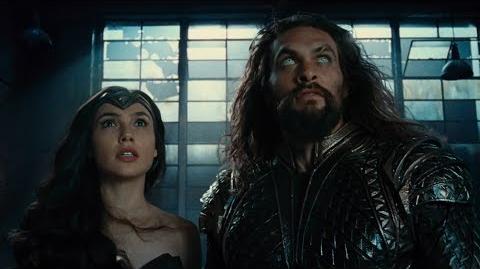 Retrieved from "https://dcextendeduniverse.fandom.com/wiki/Justice_League_(film)?oldid=150238"
Community content is available under CC-BY-SA unless otherwise noted.