"One day, you're going to have to make a choice. You have to decide what kind of man you want to grow up to be. Whoever that man is, good character or bad, it's going to change the world"
―Jonathan Kent[src]

Jonathan Nathaniel Kent[1] was a farmer from the town of Smallville, Kansas. He and his wife Martha found a baby in a Kryptonian ship and they raised the baby as their own, naming him Clark Kent. Jonathan knew that Clark was destined for greatness.

Jonathan was born in Smallville, Kansas in 1951, as part of a generation of farmers along with his brother, Harry Kent Jr.[2]

In 1963, when Jonathan was only 12, he and his father managed to save the Kent Farm from a horrible flood by barricading off the farm. The family celebrated, with Jonathan's mother baking a cake for her son to award his heroism. However, the next day, he and his family learned that they had just diverted the flood water to the Lang Farm.[3]

Growing up, Jonathan developed a friendship with Bill Metcalfe when the two would play football together. In one instance, Jonathan even saved Bill's life when he fell through the ice at a frozen river.[4]

10 years later, at the age of 22, Jonathan married another local girl, Martha Clark on October 21, 1973. A year later, Jonathan's brother Harry died. Jonathan and Martha took over the Kent Farm and ran it together, but were unable to have children of their own.[2]

One night in 1980, an alien spacecraft crash landed in one of their cornfields. Investigating, the two found the ship and a small baby. Take the baby in and hid the ship in their barn.[5] They adopted the baby and named him "Clark Joseph Kent" (combining Martha's maiden surname with Jonathan's).[6]

At some point Jonathan visited Bill Metcalfe at the Kansas State University. Making use of his friend's metallurgist capabilities it was determined that the black key that had been found with the baby was made up of a material not found in the Earth. Jonathan swore his friend to secrecy which Bill agreed upon.[7]

As Clark grew older, he developed a strong bond with Jonathan, and also incredible abilities, such as invulnerability and superhuman strength. Fearing other people's reaction, Jonathan instilled in Clark the need to hide these abilities from everybody else and act away from attention.[2]

In 1993 when Clark was 13. Pete Ross, a boy in Clark's class, continually bullied Clark and Jonathan was there to help his son, reminding him to hide his abilities. That same day, Clark and his class went on school trip and the bus went over a bridge and into a river. Clark used his abilities to save everybody on the bus with a few children seeing and telling their parents. Jonathan and Martha defended Clark saying there was nothing special about their son.

Later that evening, Jonathan and Martha discussed revealing Clark's origin to him. Jonathan went to out to see Clark, reminding him that he can't reveal the special side of himself to anybody, and was morally torn when Clark asked if he should let people die instead. So he decided to reveal to his adopted son that he came to from the stars. As night fell, he took Clark into the barn and showed him the ship that was underneath, revealing he is an alien, before reassuring him that he will always be their son. He gave Clark the Command Key that came with him to Earth and that he had been trying to figure out why Clark was sent to them and that Clark should try to find out the reason.[2]

Four years later, when Clark was 17, the whole family was out in the car and stuck on a highway in traffic. When a large tornado began sweeping across the region, the family evacuated the car and Jonathan told Clark to get Martha to safety under a nearby bridge. Clark said that could help some of the people with his special powers but Jonathan was adamant that he needs to keep that side of him secret. Clark took a small child off of Jonathan and returned her to her mother while Jonathan tried to help others. Realizing he was about to die, Jonathan signalled Clark not to save him to keep his secret safe. Jonathan died as Clark and Martha, along with others, watched. Jonathan was buried in Smallville cemetery next to his brother Harry.[2]

16 years after Jonathan's death, Clark finally met the consciousness of his biological father, discovered his true name ("Kal-El"), his true heritage (the remote planet Krypton), as well as the reason for which he was sent to Earth (Krypton's imminent destruction), finally accomplishing which Jonathan had encouraged him to ultimately do as a child. As such, Clark was finally able to fully understand and accept himself, becoming much more powerful than ever before as a result, having become determined to "keep testing the limits" on his superpowers, even finally learning how to fly in the process.

When reporter Lois Lane successfully tracked down Clark to Smallville some weeks later, he told her the story of Jonathan's death, how the latter had sacrificed his life for the preservation of Clark's secret. As a result, Lois, smitten by Jonathan's selfless heroism, as well as the childhood pain that Clark had had to endure, decided to drop what could have been the biggest story in human history.

Jonathan's prediction of Clark having to make the choice about revealing himself, as well as that of Clark changing the world (as the alien hero nicknamed "Superman") both came true shortly thereafter as well. Due to the extraordinary heroics that "Superman" demonstrated while saving Earth from the malevolent General Zod and the Sword of Rao, Clark was ultimately accepted and greatly respected by most of the people of Earth (with Metropolis' citizens even building a massive silvery statue in Superman's honor), something Jonathan had feared wouldn't happen. An hence, as Jonathan had once wisely said, Clark now viewed his superpowers that had so plagued him as a child, as a blessing. Before moving to Metropolis and applying for a job at the Daily Planet, Clark and Martha remembered Jonathan fondly, with Martha assuring him that her husband had always seen the hero that Clark was destined to become.[2]

2 years later, Jonathan's other prediction also came true - while many (notably Vikram Gandhi) viewed Superman with admiration and thankfulness, a great many others saw the godlike alien as the most controversial figure in the world, with Internet blogger Glen Woodburn worrying about humanity's horrible track record of following people with great power (down paths that led to huge human monstrosities); author Andrew Sullivan questioning whether there are any moral constrains on Superman (with International Law making every one of Superman's acts a political one); astrophysicist Neil deGrasse Tyson notably remarking how Superman's very existence challenges humanity's own sense of priority in the Universe (much like how both Copernican Heliocentrism and Darwinian Evolution had previously done), and a political interviewer ultimately questioning Senator Finch if the world even needs a Superman.[3]

After failing to stop the bombing of the US Capitol (orchestrated by Lex Luthor), Superman finally begins to doubt himself, and, believing that who and what he had tried to be right up until that very point to be "just the dream of a farmer from Kansas", he went into self-appointed exile. However, during this time, Clark saw a vision of Jonathan, who reminded his son of how he himself had once believed himself to be a hero after saving his farm a flood, yet inadvertently thereby flooding the Langs' farm. He encouraged Clark, and let his son know that he both loves and misses him. Encouraged by this vision and the relatability of his father's ordeal, Clark returns to Metropolis as Superman, just in time to rescue Lois from Lex Luthor.[3]

Jonathan was an honest man who always believed in ethics and honesty during his life as a farmer, and he loved his adopted son Clark very much. Despite Clark being practically invincible, Jonathan was very overprotective of his adopted son, fearing that the world wouldn't accept Clark the way he and Martha did, and that his presence on Earth would change everything. Ultimately, Jonathan was so adamant to not to reveal Clark's secret to the world, that he died protecting it. However, he died confident in Clark's ability to learn the reason why he had been sent to Earth, and confident that Clark would one day "stand proudly before the human race" and "change the world".

Jonathan was even able to posthumously support Clark, since when the latter was deeply depressed about the accumulated repercussions of his own attempted heroics as Superman, Clark recalled that Jonathan had once been through a somewhat similar experience as a child, and the memory of this (which manifested itself as a vision) is able to convince him to return to Metropolis as Superman. 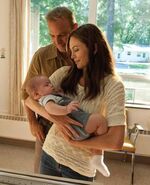 Retrieved from "https://dcextendeduniverse.fandom.com/wiki/Jonathan_Kent?oldid=144308"
Community content is available under CC-BY-SA unless otherwise noted.