The Joker's gang are a large group of career criminals operating in Gotham City, led by the murderous Joker. The gang commits various acts of extreme crime that almost always lead to large amounts of death and destruction, usually for the Joker's own amusement. Most, if not all, of them suffer from some form of mental illness; these are the kind of minds that the Joker attracts.

It's unknown how the Joker's gang came to be but is known the clownish madman upset the order established by the Falcones and Maronis and would begin to rise in Gotham City's underworld. Jonny Frost joined the gang sometime early on in the gang's creation and eventually become Joker's number one man in the syndicate.

Presumably, the gang toppled many other criminal empires, aiding Joker to become the city's top crime lord while having encounters with Batman. The gang also had a rivalry with Black Mask and his criminal empire, though Sionis was too fearful to make a move against the gang's second-in-command Harley Quinn due to fear of the Joker.

Particular members of the gang, dressed in flamboyant outfits, lent a hand in the creation of Harley Quinn shortly upon freeing the Joker from Arkham Asylum.[1]

By 2016, Joker became depressed as his lover/partner was gone from his life for quite some time after her arrest by Batman and has Frost look for her. By bribing some high-level officials, Frost learned that Quinn was being held in a maximum prison facility in Louisiana and informed his boss, who used his resources to find Harley and save his lover. Joker and his thugs traveled across the country to get a prison official, Griggs, to help them in Joker's plan. They learned of Task Force X and the nano-bombs and later attacked Van Criss Laboratories to force Van Criss, the inventor of the nano-bombs, to help them save Harley.

Afterwards, they hijacked a military helicopter in Midway City to save Harley but were shot down by the United States military, killing them all except Joker and Harley.

After Harley was returned to her cell in Belle Reve after she helped Task Force X kill Enchantress and Incubus, with her little reward, Joker and another gang of thugs attacked the prison, killing several guards and freeing her from her cell. Harley then embraced Joker, as they reunite together.[1]

After the Joker broke up with Harley, she was kicked out of the gang. After she declared their breakup publicly, the lack of the gang's protection resulted in numerous individuals coming after her, hoping to settle a score with her.[2]

Joker and the Grin Twins at Van Criss Laboratories 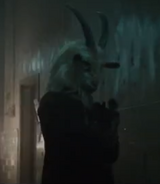 Goat Head Priest during the assault on Arkham Asylum

Behind the scenes image of Sea Urchin 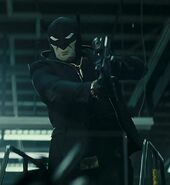