The Insurgency was an organization led by Batman in the potential dark future of Earth known as Knightmare, dedicated to opposing the malevolent rule of Superman and Darkseid's Regime. However, thanks to the Flash traveling back in time to warn Batman about Superman's threat, it is no longer clear if this is still the future of Earth, or if it was averted.

In a dark potential version of 2022, Lois Lane was killed by Darkseid, with Superman placing the blame on Batman. Consumed with grief, Superman was left susceptible to Darkseid's Anti-Life Equation and allied himself with the forces of Apokolips becoming a dark, tyrannical ruler of the planet.[2] Batman promptly founded the Insurgency in order to combat this new threat, thus beginning the long Injustice War.[3]

The kryptonite trap and the death of Batman

"She was my world and you took her from me!"
―Tyrant Superman to Batman.[src]

Bruce Wayne, as an alternate version of himself wearing a modified Batsuit, met with an allied convoy of Insurgents. When the convoy arrived, Bruce asked if one of the agents had retrieved "the rock," mounting into the back of a transport truck, upon which a LexCorp crate was stored. However, when the agent opened the crate, it was revealed to only be green light bulbs. Apologizing, he pulled out his weapon and held Batman at gunpoint as undercover Regime Stormtroopers revealed themselves to be amongst the Insurgents.

Subduing the Insurgents, the stormtroopers then executed them as Batman watched. Roaring in fury, Bruce quickly gunned down multiple stormtroopers, disarming them of their weapons and utilizing his Batarangs to take down as many as he could as the rest of the regime moved in on their location. Though he managed to take down a large number of their forces, the stormtroopers continued to converge on the area, aided by the arrival of a swarm of parademons, who began to abduct any Insurgents there. Becoming increasingly overwhelmed, Bruce fought as the stormtroopers surrounded him, barely able to restrain him, and continued to brutalize any troops he could get a hold of. Eventually, seeing the struggle that Batman was putting up, a Parademon knocked Batman unconscious.

Later, Batman awoke to find himself bound in chains in a bunker, accompanied by two other people, eyeing them warily as he heard the clap of a sonic boom, signifying the arrival of Superman. The Man of Steel suddenly landed in the bunker, and the Regime stormtroopers reverently knelt upon his arrival. Approaching Batman, Clark abruptly killed the two other individuals beside Bruce with his heat vision, then removed Bruce's mask, revealing his horrified expression. Clark then turned to Bruce, angrily blaming him for letting Lois die, as she was "his world."

Finally, laying a gentle hand on Bruce's chest, Clark gave Bruce one final sneer before ruthlessly pushing his hand through the bat symbol, killing him painfully.[3]

Soon after this, Cyborg and the Flash, two of the last Insurgents, utilized the Mother Box acquired by the Joker[1] to create the cosmic treadmill. They activated the treadmill, and the Flash ran as fast as he could, using it as a vehicle through the Speed Force, and through time itself. He and Cyborg planned to travel back in time to warn Bruce Wayne of Superman and Darkseid's threats to the planet. As Barry got closer, the energies of the Speed Force affected the Bruce Wayne of 2015, who then saw his fate in the wasteland of the Justice League's failure. The sight of his death caused Bruce to awaken moments before the bright blue vortex of the Speed Force opened beside him, and out reached the Flash. He told Bruce that Lois Lane had been the key to everything, and to find his present self and the others.[4]

Unfortunately, Barry realized he had gone too far back, and was too soon for Bruce to understand. Returning to the Speed Force, Barry gave Bruce one final message: he was right, and always had been, about "him."[3] 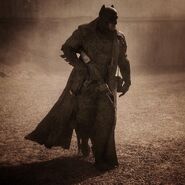 Deathstroke
Add a photo to this gallery

Retrieved from "https://dcextendeduniverse.fandom.com/wiki/Insurgency?oldid=166536"
Community content is available under CC-BY-SA unless otherwise noted.