Homo Magi are a subspecies of Humans that have the ability to manipulate magic to varied degrees.

Very little is known about this supernatural human subspecies, however Amanda Waller once described Enchantress as a sorceress from another dimension, indicating that the source of the Homo Magi's powers may be in other, unearthly dimensions.

Homo Magi differ greatly from each other in appearance - while some appear perfectly human, some have a distinct inhuman appearance. Their exact powers/traits are similarly varied. 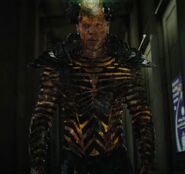 Madame Xanadu
Add a photo to this gallery

Retrieved from "https://dcextendeduniverse.fandom.com/wiki/Homo_Magi?oldid=129616"
Community content is available under CC-BY-SA unless otherwise noted.