Queen of the Amazons

"Be careful in the world of men, Diana. They do not deserve you. You have been my greatest love. Today, you are my greatest sorrow."
―Hippolyta to Diana[src]

Hippolyta is the Queen of the Amazons, a former lover of Zeus and mother to Diana.

Shortly after Zeus supposedly created humanity, his malevolent son, Ares, attempted to corrupt them, fueling humanity with rage, hate, and bloodlust. As a result, Zeus created the Amazons as a way to help guide humanity and spread love.[1]

At some point, before Diana was born, Hippolyta and her fellow Amazons allied themselves with the Olympian Gods, Mankind, the Atlanteans and a Green Lantern ally to fight Steppenwolf and his army of Parademons and Priests, who had come to conquer and terraform the Earth into a planet similar to Apokolips, under the command of Darkseid. The war was eventually won by the alliance and Steppenwolf's army retreated, leaving the three Mother Boxes behind. The boxes were left under the control of Mankind, the Amazons and the Atlanteans.[citation needed]

Escaping slavery and bearing a child

Sometime after Steppenwolf's attempted invasion, Ares induced war among humanity again, which lead to them warring with and enslaving the Amazons. Hippolyta and her sister Antiope, however, fought back against Ares and their captors, and succeeded in freeing their people.

Meanwhile, Ares also rebelled against the other Olympian Gods for not sharing his bloodlust and anti-human sentiment, starting the devastating War of the Gods. Through his rage, he killed his divine family off one by one, until only Zeus remained. After defeating and banishing Ares from Olympus, Zeus conceived a demigod child with Hippolyta, a child capable of one day defeating and killing Ares (therefore known as the "Godkiller"), a daughter named Diana.

Using the last of his divine powers, Zeus created the paradise island of Themyscira as a safe haven for the Hippolyta and the newly freed Amazons, concealing it from Ares, ensuring that the Godkiller Diana would grow up safely.[1]

As Diana grew up, Hippolyta intentionally deceived her - instead of revealing Diana's true demigod heritage, she claimed to have personally sculpted her daughter from clay, after which Zeus brought her to life. This was partially because Hippolyta didn't want her beloved daughter to face Ares, and partially because the sooner Diana learned the truth, the easier it would be for Ares to find her. As such, Hippolyta initially strictly forbade Diana to even learn Amazonian combat.[1]

Eventually, Hippolyta caught Antiope training Diana in the grounds. Furious, she sent Diana back to the palace and chastised her sister for disobeying her orders. Antiope argued that Diana had to be trained as it was her fate as not only an Amazon, but as the Godkiller and that Hippolyta could not protect Diana forever. Hippolyta relented, though told Antiope that she must train Diana harder than any Amazon so that she would not only match Antiope, but surpass her.[1]

After many years and Diana eventually growing to adulthood, Hippolyta oversaw one of her daughter's training exercises. Diana fares well, but drops her guard with Antiope who overpowers her which caused Diana to accidentally triggered her latent powers and knocked out Antiope with a shock wave from her vambraces. Hippolyta showed regret at allowing Diana to train.

When Germans pursued Steve Trevor to Themyscira, Hippolyta personally took part in the battle, cutting down several soldiers with ease. However, by the end, she lost many of her people and Antiope. She came very close to killing Steve out of anger and grief, only talked down by the words of Diana. When Steve told the Amazons of the ongoing war she responded with horror, but told her people and Diana that they were forbidden to leave the island as they had no part in the wars of the outside world.[1]

Hippolyta met Diana on the shore of Themyscira after she took a suit of armor, the Godkiller sword, and a shield from the armory. Knowing she couldn't convince Diana to stay, Hippolyta gave her Antiope's tiara and told her to live up to its legacy. She told Diana to be careful in the world of men, saying Diana was her greatest love and her greatest sorrow.[1]

With the Earth left defenseless against the greater threats of the universe, Steppenwolf, the herald of Darkseid, traveled back to Earth through a boom tube connected to the Mother Box kept at the Penetralium. Hippolyta and her Amazons, upon receiving report of the Box's sudden activity, were present and awaiting the arrival of the Apokiliptian warrior.

Hippolyta is an extremely capable and skilled leader, as well as an equally courageous warrior, evident in how she saved her fellow Amazons from human slavery as the War of the Gods broke out. However, Hippolyta's experiences have also made her very embittered against humanity (adamantly believing that the race was no longer worth saving) and very overprotective of her daughter Diana (much like how Jonathan Kent would later be of Clark), to the point of outright deceitfulness and strict rules against Diana even learning Amazonian combat. Hippolyta would ultimately, however, allow adult Diana to leave Themyscira with Steve Trevor, on a quest to save "Man's World" from Ares. 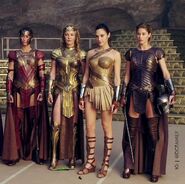 Dolby Cinema poster
Add a photo to this gallery 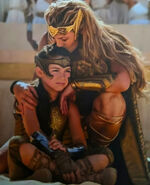 Retrieved from "https://dcextendeduniverse.fandom.com/wiki/Hippolyta?oldid=158608"
Community content is available under CC-BY-SA unless otherwise noted.