"That's the thing about invisibility. You end up all by yourself."
―Freddy Freeman to Billy Batson[src]

Freddy Freeman is the best friend and foster brother of Billy Batson.[1][2] When Batson was chosen by the wizard Shazam to become his champion, Freeman helped his best friend to come into his own with his new powers as the resident metahuman expert. Eventually, he and the rest of his foster siblings gained the powers of Shazam.

Like the rest of his siblings, Freddy was a ward of the state until taken in by foster parents Victor and Rosa Vasquez. At some point before meeting Billy Batson, he also became interested in the emergence of metahumans and their roles as heroes.[3]

The birth of Shazam

At the end of the day, Freddy was on his way to go home, but the bullies Brett and Burke Breyer hit him with their car and picked on him, while his foster siblings failed to successfully defend him. His new adoptive brother Billy came to his aid, beating up the boys picking on Freddy. It was during his running away from these bullies that Billy was summoned by the wizard Shazam and granted his powers.[3][4]

Unsure of what to do or how to return to his normal form, Billy turned to Freddy for advice on how to behave like a superhero and use his powers. In the process of doing this, Freddy began to film Billy and to post videos of him using his powers to YouTube, where they became increasingly popular and raised Shazam's profile in Philadelphia.[3][5]

Getting let down by Shazam

Later, Freddy is walking with Billy through the hallways at school, and are confronted by Brett and Burke. Freddy tells them that he knows who the new hero is. Because they don't believe him, they tell him to make sure he shows up at lunch tomorrow. Frustrated with this offer, Billy walks away to class while Freddy asks him if he's going to show up or not.

The next day, Freddy is sitting in the cafeteria surrounded by everyone, waiting for Shazam to show up. Feeling embarrassed, Freddy pretends to try and call him, but when a kid figures out he is faking the call, everyone walks away, leaving Freddy all alone.

Angry and frustrated, Freddy later walks across the city to meet Billy, who is out getting paid to entertain people with his powers. As he is putting on a show with the "Lightning with my Hands" song, Freddy angrily storms through the crowd of people and confronts Billy about not showing up. Then, when Billy accidentally uses his lightning powers to electrocute a bus and rescues it, Freddy is still angry. He then proceeds to let it all out and talks about how he wishes he had Billy's powers, but since he is a disabled child, he gets constantly bullied. He angrily stomps away.

Not too long after, he is walking through the city and witnesses Billy getting punched across the city. When Billy flies over to Freddy asking for help, Freddy is shocked to see that Billy can fly. Suddenly, Billy is flung into the ground by Thaddeus Sivana, and Freddy asks who the other guy is.

Later, Freddy arrives at the mall where Billy was trying to run away from Sivana in an attempt to find Billy, not knowing that Billy has changed back to his child form and blended in with the crowd to get away from Sivana. Freddy tries calling out Billy's name, not knowing that his conversation with Billy from earlier would be recorded on the news and put him in danger. He is captured by Sivana, who takes him to an isolated room, and forces him to give the location of Billy.

He is threatened along with the rest of his foster siblings by Thaddeus Sivana in order to gain Shazam's power. However, all of them were granted the power of Shazam, allowing them to defeat the villain and his demonic allies.[3]

Lunch with Shazam and Superman

One day, Freddy is walking and sitting alone in the cafeteria, with people looking at him and the Breyer brothers mocking him, as they have not forgotten about Shazam not showing up. While he is eating and sitting alone, his foster siblings join him. Because they have different lunch periods, he asks them why they're here. Then, Shazam walks in, surprising everybody, including Freddy. Shazam then talks about how Freddy taught him how to be a good superhero and excitedly sits down with him.

When Shazam says he has brought another friend, everyone gasps in awe when Superman walks in. Looking over, Freddy saw Superman standing right next to him, and is shocked that the Man of Steel is actually there.

"Freddy Freeman. This guy taught me everything I know about being a dope superhero. True story. You should get some pointers from him."
―Shazam[src]

Freddy Freeman is talkative and smart. He's a massive superhero enthusiast who knows a lot of random information and is very knowledgeable about superheroes. He owns many pieces of memorabilia from the members of the Justice League, and is always excited to talk about them, to the point that he occasionally annoys those around him.

Freddy makes light of his situation in life, often cracking jokes about his walking disability, but that does not mean that he is unaffected by it. He is bullied and disabled, and it is made clear through his argument with Billy that these things do in fact bother him. He feels unseen and lesser-than. However, he tries not to focus on those feelings and to keep his head up. He cares about his foster family and welcomes Billy into it immediately, then feeling hurt each time Billy rejects them.

Upon learning that Billy obtained superpowers, Freddy quickly became excited to help Billy discover his powers, soon the two became close friends over Shazam's powers which they used for their entertainment. However, Freddy also struggled with jealousy as Billy irresponsibly used the superpowers that Freddy always desired. It is not stated if he feels this way the entire time, or if it only emerges once Billy starts blowing him off and acting selfishly. At that point, they argue and Freddy tells Billy how he feels about his behavior and how much he wishes it were him. Even with his anger at Billy, when Freddy is cornered by Sivana, he does not immediately give up Billy's location.

After Sivana kidnapped Freddy and his foster siblings to use as hostages against Shazam, Billy proved that he cared about them and apologized to Freddy over their disagreements which culminated in Billy giving Freddy his own Shazam powers. Now having his own superpowers, Freddy was thrilled to finally be a superhero on his own and repaired his friendship with Billy. 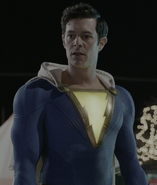 Super Hero Freddy
Add a photo to this gallery

Retrieved from "https://dcextendeduniverse.fandom.com/wiki/Freddy_Freeman?oldid=135510"
Community content is available under CC-BY-SA unless otherwise noted.