Thing Growing Out of the Couch

Eugene Choi is Billy Batson's foster brother at his new home, who enjoys tech and non-fiction. Eventually, he and the rest of his foster siblings gaine the powers of Shazam.

Just like his other foster siblings, Eugene was a ward of the state until taken in by foster parents Victor and Rosa Vasquez.

One night, he was playing video games while Victor and Rosa brought home Billy Batson, a foster child who was just adopted into the family. When they enter the house, Eugene yells out at his video game. When Rosa and Victor notice this, Rosa briefly introduces Billy to Eugene. Victor walks over and tells him that sodas aren't allowed after sunset. Because Eugene was playing for a good long while, he didn't realize it had gotten dark.

"Back off, assbags! I know how to use these things!"
―Eugene to the bullies.[src]

The next day at school, Eugene witnessed his brother Freddy getting bullied by Brett and Burke Breyer, while Mary and Darla fail to stop them. Right after Billy ran over to fight them, Eugene grabbed the nunchucks from Burke's pants and tried to confront them by swinging them around, but he clumsily hit himself in the back of the head. While Eugene was distracting the bullies, Billy ran off. While the bullies ran after Billy, Eugene and the rest of his foster siblings walked over to the hurt Freddy to make sure he was okay.

Later that night, Rosa was on the phone with the police trying to find Billy, who still hadn't returned. Meanwhile, Eugene was looking Billy up online to find his social media accounts, but couldn't find anything. He showed his phone to Mary, while pointing out that he had no social media presence.

One night, the family was sitting at dinner. Victor excitedly talked about how there was a new superhero in town and that he believed he was doing a good job. However, Eugene believed otherwise, and mocked the hero about how he was charging people's phones while Eugene could just do it with a plug. He continued to engage with the others in talking about how bad the hero was, who, unbeknownst to them, was sitting right there at the table.

At one point, Pedro shows Eugene Billy's notebook and he uses his computer skills to help Billy track down his birth mother.

Finding out about Billy's Superpowers

One evening, Eugene was sitting in the living room with Mary, Darla, and Pedro when they overheard Billy getting scolded by Victor for his irresponsible actions. He looked over at the TV and noticed video footage on the news of Freddy talking to Shazam, and questioned why Freddy was with a superhero. Mary got suspicious about this, and when she quietly pointed out to her siblings that Billy is the superhero, Eugene questioned her suspicions out loud, only to be followed by Darla excitedly confirming it.

The four siblings walked upstairs to the front of Billy and Freddy's bedroom to closely listen in on Victor. Once the foster parents walked out of the room, the siblings slowly walked inside to comfort the saddened Billy, knowing that he was the hero. When Billy noticed Pedro holding his notebook, Mary told him that Eugene finished his search. Eugene then proceeded to tell Billy the names of his biological parents and the location of his mother. Once Billy ran off to go see her, Rosa and Victor ran after him while telling the foster siblings to stay inside. Not too long after, Freddy entered the house, and the siblings were confronted by Thaddeus Sivana.

Eugene and the rest of his foster siblings were in the living room, being held hostage by Sivana. Later, when Shazam arrived back home to confront Sivana, Eugene was amazed to see the hero standing right there. A few minutes later, when Shazam entered the Rock of Eternity to give up his powers to Sivana and save his family, Eugene and the other siblings followed them inside and brought "weapons" to confront Sivana and save their brother. When they tried to get out, Eugene noticed that the door they came through was gone. While the group followed Darla in an attempt to escape, they came across a lot of doors, hoping this could be a way out. Eugene opened one door, but noticed crocodile-men, and immediately closed the door. Eventually, Shazam helped get them out, and they all ran over to Christmas Village to hide from Sivana.

When Sivana found the siblings at Christmas Village, Shazam fought him while the siblings watched. When Freddy noticed Sivana's weakness of losing his powers when the sins exit his eye, Mary started an attempt to divide and conquer, only to have them captured by the sins and used as hostages against Billy so he would give up his power. Eventually, Billy knocked the staff out of Sivana's hands and Eugene joined the rest of his siblings in putting their hands on the staff and earning superpowers.

While Billy fought Sivana, Eugene and the other siblings assembled to fight the sins, while he was testing out his new electricity powers. Eventually, when Billy got the eye out of Sivana's head, Eugene and the other siblings flew over to Billy to join and congratulate him. For a brief moment, they believed Billy was being tempted by the eye, but then laughed when Billy said he was just joking around. Around them, a cheering crowd had formed, and soon after, they returned to the Rock of Eternity to return the eye and the Sins.

Lunch with Shazam and Superman

One day at lunch, while Freddy was sitting, alone, Eugene and the rest of his siblings went over to Freddy's table, as they have made a special arrangement. He is present when Shazam walks in, sits down with Freddy, and talk about how great of a person he is. He also witnesses Superman walking in to sit down and have lunch with them.

Eugene is a huge gamer, and is frequently occupied by a screen. He is brave, but rather reckless and clumsy, as seen when he attempts to defend Freddy Freeman from the bullies with nunchucks, but hit himself in the head instead. Eugene has a habit of quoting video game terms when fighting as a superhero.

Mystical transformation: After shouting Shazam!, while holding the Magician's staff, Eugene was given the ability to transform. When transformed, Eugene has many powers and abilities, which exceed the capabilities of human beings.

"Look, I'm not a hacker, okay? But I have played Watch Dogs and Uplink. And maybe I did pick up a few skills, which maybe did get me into federal databases most people can't get into."
―Eugene Choi to Billy Batson[src] 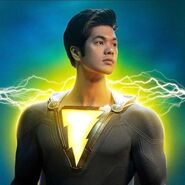 Retrieved from "https://dcextendeduniverse.fandom.com/wiki/Eugene_Choi?oldid=135905"
Community content is available under CC-BY-SA unless otherwise noted.