"Fight? We use our principles. I mean that's how we are gonna get to vote. Although I am not opposed to engaging in a bit of fisticuffs, should the occasion arise."
―Etta Candy to Diana Prince[src]

Etta Candy was Steve Trevor's secretary, as well as a good friend of Wonder Woman during the World War I era. When the British found a Mother Box, the United States asked her and the Wonder Men to deliver it to them. She died sometime later after the war ended.

Etta Candy served as Steve Trevor's secretary during World War I. When she first introduced herself to Diana, the latter considered her job as a secretary to be similar to that of a slave. Diana gave her the God Killer and her shield and trusted her to keep them safe.[2]

When Steve and Diana were fighting spies of General Ludendorff, she threatened a spy with Diana's sword to prevent him from escaping.[2]

After the War and death

After the war ended, the British found a Mother Box, and the United States told her and the Wonder Men to deliver it to them.[3] She later died sometime after 1918.

Etta is very friendly, affable, bubbly, and talkative, as well as an adamant advocate for female suffrage and equality. Hence, she took an instant liking to Diana Prince when the latter naively compared the job of a secretary to slavery, which Etta seemed to interpret as Diana calling out the inequality of genders at the time. Etta notably also seems to adore her employer Steve Trevor, as she embraces him upon learning of his survival, and he trusts her completely, even when it comes to carrying out unusual tasks, such as carrying off Diana's Amazonian sword and shield, and instructing Diana on some female etiquette hacks.

Etta is also quite tactful, patient and improvisational, since she didn't hold Diana's naive social blunders against her, awaited without complaint as Diana tried on numerous potential outfits, and quickly used the God Killer sword to stop General Ludendorff's spy in his tracks when he attempted to run past her. Etta could occasionally, however, be somewhat naive, which allowed the disguised god Ares to rather easily deceive her into thinking of him as an ally. 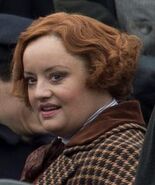 Etta Candy behind the scenes. 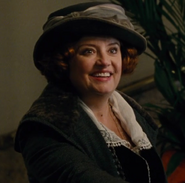 Retrieved from "https://dcextendeduniverse.fandom.com/wiki/Etta_Candy?oldid=135822"
Community content is available under CC-BY-SA unless otherwise noted.