"There is one more powerful!"
―Envy to Thaddeus Sivana[src]

Envy is one of the Seven Deadly Enemies of Man.

When Teth-Adam's family was murdered, he unleashed the Seven Deadly Sins, including Envy, to kill his family's murderers and eventually millions of people in the city of Kahndaq. Envy and the rest of the Sins then killed the Council of Wizards, but the last surviving wizard managed to defeat Envy and the Sins, before imprisoning them within statues in the Rock of Eternity.[1]

In 1974, when the wizard attempted to find a champion to inherit his powers, and he brought the young Thaddeus Sivana to the Rock of Eternity. Wrath and the other sins watched as the wizard offered Thaddeus to become his champion and receive his powers, but they offered Thaddeus to become their champion by playing on his insecurities that his abusive unloving father and bullying older brother Sid made him develop, making Thaddeus attempt to take the Eye of Sin and the Wizard to deem unworthy and send him back to earth. However, Wrath and the other sins sent Thaddeus a message on his magic 8 ball to find them.[1]

In 2018, as the Wizard had failed to find a champion to inherit his powers, Sivana, now a doctor, arrives on Rock of Eternity and takes the Eye of Sin, which frees Envy and the other sins from their statues. They then entered Sivana's body with the Eye of Sin, empowering Sivana. The next day, when Sivana goes to his father's company, Sivana Industries, interrupts a board meeting, and uses his new found powers to kill Sid by throwing out the window, he unleashes Envy and the other sins on the board members, then Envy and the other sins kill all of the board members except Mr. Sivana. After Sivana gloats to his father about his "real power", Envy and the other sins inform Sivana that the wizard had finally chosen his champion and instruct him to kill the champion before he learns how to use his powers or he will defeat him. After Sivana tells the sins to show him where to find the champion, and recalls the sins to his body, except Greed, whom Sivana leaves behind to kill his father for displaying greed.[1]

Fight against the Shazam family

After Sivana finds the champion, who a teenager named Billy Batson, and he forces Billy to give him his powers by taking his foster siblings Freddy, Mary, Pedro, Eugene, and Darla hostage, then when Sivana takes Billy to the Rock of Eternity so he can transfer his powers to Sivana, Envy and the other sins are unleashed to watch. But they stopped by Freddy, Mary, Pedro, Eugene, and Darla, who followed them through the portal, and Freddy strikes Sivana with his batarang in the back of the head, which causes Sivana to bleed, which causes Billy to release needs the sins in his body keep his powers. Then Sivana recalls Envy and the other sins to his body so he can heal.

After Billy and his siblings escape from Sivana on the Rock of Eternity and the two begin a fight at a Christmas carnival, Sivana unleashes the sins, except Envy, the sin that represents himself so he can keep his powers, to capture Billy's siblings while Wrath fights Billy. When Billy was about to give up to Sivana, and he turns his siblings into adult superheroes by getting them to say the Wizard's name, while his siblings fight against the other sins Billy and Sivana continue to fight until Billy tricks Envy into leaving Sivana's body by saying he isn't as powerful the other sins and calling him weak, worthless and ugly, enraging Envy to attack him, leaving Sivana powerless and about to fall to his death but Billy says Shazam to summon the lightning and vaporize Envy into mist and then says Shazam again to save Sivana and take back the carnival just as Envy had reformed. After Billy removes the Eye of Sin from Sivana, Envy and the other sins are sucked in. Then Billy and his siblings return Eye of Sin to Rock of Eternity, and Envy and the other sins are imprisoned in their statues once again.[1]

He is the embodiment of envy, covetousness, and jealousy. 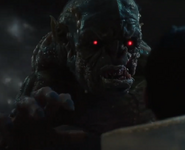 Retrieved from "https://dcextendeduniverse.fandom.com/wiki/Envy?oldid=133840"
Community content is available under CC-BY-SA unless otherwise noted.