Bombing of the United States Capitol

Inconclusive: Batman and Superman unite to take down Lex Luthor

"And now, you will fly to him, and you will battle him. To the death. Black and blue. Fight night! The greatest gladiator match in the history of the world: God versus Man! Day versus night! Son of Krypton versus Bat of Gotham!""
―Lex Luthor to Superman[src]

The Duel at Gotham Port was a fight between Superman and Batman.

"The greatest gladiator match in the history of the world: Fight night! God versus Man..."
―Lex Luthor[src]

After watching the explosion at the Capitol, Batman infiltrated the LexCorp Industries research center, and stole the kryptonite nugget that Lex Luthor had been keeping (always intending for Batman to steal it). From the kryptonite, Batman fashioned three kryptonite gas grenades and a kryptonite spear.

Batman then arrived at the abandoned Gotham Port and prepped the area by setting up traps and putting the kryptonite spear in place. When all was ready, Batman activated the Batsignal and waited for his adversary to appear.

Meanwhile, Lex Luthor was confronted by Superman, who threatened to take him in. Lex Luthor revealed that he knows Superman's identity and has kidnapped his Mother. Luthor then threatened to kill her within an hour unless Superman brought him the head of Batman. Running out of time and options, Superman flew to Gotham in hopes to gain Batman's help.[1]

"Bruce, please! I was wrong, you have to listen to me, Lex wants us to....
"You don't understand, there's no time!"
"I UNDERSTAND!"
―Superman and Batman[src]

Superman arrived at Gotham Port, where Batman had been waiting. As Superman attempted to explain the situation to Batman, he activated one of Batman's traps: sonic emitters that stopped Superman right in his tracks. However, Superman was able to quickly dispose of the devices by throwing the pieces of a manhole cover at them. Superman continued to plead with Batman, however Batman refused to listen, claiming he already understands the situation. Superman demonstrated his strength to Batman by pushing him away with a light tap. However, this activated another one of Batman's traps, gattling guns, which began to open fire on Superman. Superman disposed of the gattling guns quickly as well, by using his heat vision to cut through all of them.

"You're not brave! Men are brave!"
―Batman to Superman[src]

Batman, knowing that his odds can only improve if Superman is placed into a weaker state, used a smoke grenade to disappear. Superman used his speed to dissipate the gas, and correctly presumed that Batman was using a grenade to even the odds. What he didn't know was that the grenade had kryptonite gas and was exposed to it, rendering him "human".[1]

Superman, unable to do anything, recovered and tried to fight Batman, only for him to realize his powers had been suppressed when Batman blocked his punch. Batman utilized this advantage rapidly, using his armor's strength and his combat training to beat Superman and tackling him down into a building. However, the kryptonite was not effective for long, as Superman gained his strength and invulnerability back. With it back, Superman floats up and tackles Batman through the floor to a bathroom below then picks him up and throws him through several toilet stalls, destroying them while slowly regaining his speed.[1]

Superman then charged at Batman with a fierce yell but with little time, Batman reloaded his grenade and fired just as Superman punched him. This caused Batman's face armor to break but it further weakens Superman, giving Batman an even greater advantage. Batman knocked Superman down the building and using his Grapple gun threw him around two pillars.[1]

Batman, having clearly won, grabbed his kryptonite Spear and sliced it across Superman's face, fulfilling his promise to see if Superman bleeds. At this time, Superman started pleading to Batman, asking him to save "Martha", just as Lois Lane arrived to the Old Port. Batman was taken aback to hearing that name, as coincidentally, his own mother was named Martha, and shocked as he didn't plead to save himself. Enraged, Batman started questioning Superman why he said that name, as Lois Lane explained that it is his mother's name.

Batman was shocked to hear this, and started to experience flashbacks to his parents' death, and finally realizing that Superman's upbringing on Earth gave him selflessness to others despite being alien and that the threat was never real; even more, Batman realized that by obsessing on Superman turning evil, he himself became the embodiment of this evil himself. In disgust, Batman threw away his spear, realizing what he had done.

With Lois Lane, Superman explained that his mother, Martha Kent had been kidnapped and Lex Luthor wanted to trade Batman's life with that of Martha's. Batman, coming to his senses agreed to help Superman, while Lois Lane explained that the Kryptonian Scout Ship began to drain energy from Metropolis. Superman originally wants to save his mother, but Batman decided to do it himself, promising that his mother would not die.[1]

Superman, now having the alliance of Batman, flew to the Scout Ship while still recovering from kryptonite exposure to confront Lex Luthor.

Batman, in the Batwing, locked on Anatoli Knyazev's phone on the old port of Gotham to rescue Martha Kent. On the way, he contacted his butler, Alfred Pennyworth to admit his mistake. Alfred agreed that Batman's fears were unfounded and sarcastically mentioned that Batman didn't deserve him. In the Old Port, Batman scanned and eliminated resistance outside the warehouse, while Alfred controlled the Batwing. With Alfred's help, despite being weary after his duel, Batman still defeated 22 hostiles in a warehouse with relative ease, and rescued Martha Kent.[1] 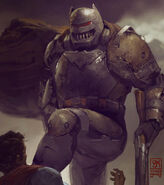 Retrieved from "https://dcextendeduniverse.fandom.com/wiki/Duel_at_Gotham_Port?oldid=186779"
Community content is available under CC-BY-SA unless otherwise noted.