"You better not be wasting my time."
―Deathstroke to Lex Luthor[src]

Slade Wilson is one of the world's deadliest assassins and a mercenary-for-hire, operating under the moniker Deathstroke. He is one of the greatest adversaries of the Batman[1], and an acquaintance of Lex Luthor.

At some point, Slade would eventually become one of the greatest enemies of Batman.

"We have to level the playing field, Mr. Wilson. To put it plainly, shouldn't we have a league of our own?"
―Lex Luthor to Deathstroke[src]

Deathstroke was invited to Lex Luthor's private yacht after the latter had broken out of Arkham Asylum. Luthor was talking about Superman's return and the formation of the Justice League when Wilson arrived, removing his mask, and warned Luthor not to waste his time. However, Luthor justified this by suggesting that they "even the playing field" by creating a league of their own.[2]

As an assassin, Slade Wilson is cold, blunt, and irascible, being more than willing to leave Lex Luthor's yacht when he warned the latter not to waste his time, but seemed quite interested after hearing his proposition to start "a league of their own" in response to the Justice League's formation and resurrection of Superman. 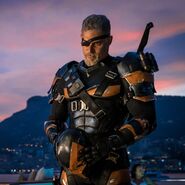 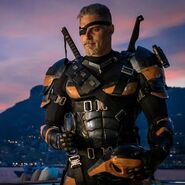 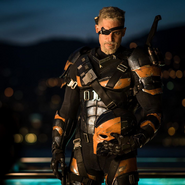 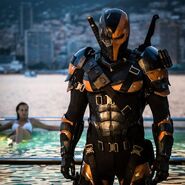 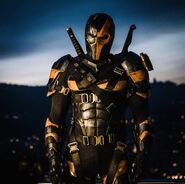 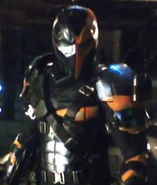 BTS of Deathstroke on a boat

Zack Snyder and Joe Manganiello
Add a photo to this gallery