David Ayer's Suicide Squad, also known as the Ayer Cut (no official title) is the director's original cut of Suicide Squad. David Ayer confirmed there's only some VFX work to be completed in order to finish his vision, but Ann Sarnoff, head of Warner Bros. later said that the film would not be put into production.

As the Snyder Cut campaign started to build steam, the hashtag #ReleaseTheAyerCut started popping up on social media in support of David Ayer's original version of the film being made available to fans. Due to negative reception to Batman v Superman: Dawn of Justice and positive reception to early Suicide Squad trailers, Warner Bros. panicked about the more serious tone of the original movie and hired Trailer Park, the editing studio that cut together the trailers, to edit the entire theatrical version of the movie. This resulted in mixed reactions from fans and critics. While an extended cut of Suicide Squad was released, it only restored ten minutes of footage and was seen as a disappointment by many, claiming it wasn't compensation for the injustice done to the director and his original vision of Task Force X.

As steam built up for Zack Snyder's original version of Justice League, however, there is growing speculation that HBO Max will release the Ayer Cut, given that it would earn them a great deal of money for a very small cost, but at this point, only time will tell.

On December 20, 2020, Zack Snyder reported in an interview that he plans to offer support for Ayer's Suicide Squad cut as soon as he's done working on his Justice League cut.[2]

On March 22, 2021, in an interview with Variety, Ann Sarnoff, the Warner Media Studios CEO stated that they would not be developing David Ayer's Cut.[3]

On July 29, 2021, on the eve of the release of The Suicide Squad, David Ayer revealed that Lee Smith had edited his cut of Suicide Squad. Lee Smith previously edited the The Dark Knight Trilogy movies under Christopher Nolan.[4] Ayer also publicly expressed he is "done" talking about the director's cut of the film.

On July 3, 2021, Joel Kinnaman, John Cena and Mayling Ng called for the cut to release. Hours later, Margot Robbie called for it to be released.

On Feb. 10, 2022, Variety released an interview clip of Will Smith giving his verbal support for the release of the Ayer Cut.[5]

On April 10, 2022, TVLine reported that during a Q&A with Jay Hernandez, the actor reaffirmed his support for the cut's possible release. According to Hernandez, co-stars like Leto and Kinnaman and everyone else that he'd talked to were in full support of the release. Hernandez suggested that a streamer like HBO Max should release the cut. TVLine further contacted an HBO Max representative who stated that there were no plans currently to release the cut.[6]

Harley and Deadshot hook up

Eyeball Man, a character present in neither the theatrical nor extended cut

Crying Baby Man, a character present in neither the theatrical nor extended cut 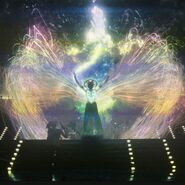 The Joker after surviving the helicopter crash

Joker holding a gun to Harley

Katana is taken over by Enchantress

Harley Quinn in her wedding dress

An early version of the script, as well as concept art, also had Enchantress' strings pulled by Steppenwolf, the former turning humans into parademons instead of Eyes of the Adversary, but this was removed before filming began as the stories of Suicide Squad and Justice League fell into place, and so would not appear in Ayer's version.[12]

Ayer stated on Twitter that the first 40 minutes of the film were left on the cutting room floor (though he probably didn't literally mean every second of those 40 minutes).[13]